Show us your recent WIPs here! 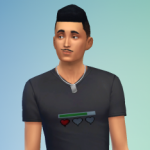 RyeCris16 Posts: 2,288 Member
January 2015 edited May 2015 in The Sims 4 Lots
Well, I though it would be a good idea if I'm going to start this thread about sharing our latest WIPs. This will help for other Simmers to show how they are impressed with our ongoing projects.

I'm making a list of WIPs in my second post (similar to @rosemow) so it will be easy for other Simmers to navigate our recent WIPs.

You can share your latest projects (whether it's a lot, a room, or a sim) that you're working on. If you're going to pause it or if you're done with your project, please let me know so I can edit my list. You can also share yourunfinished/scrapped projects too! In that case, we can show how much we care with these.

Thank you and happy Simming and building!

Side Note:
If you're done with your WIP/s but don't have a showcase thread, you can share them in Share Your Newest The Sims 4 Creations Here! thread, created by @BreeMiles.