White
Sign In · Register
Home› Discussion› The Sims 4 Speculation and Rumor
August 5th- It's time for our Friday Highlights! You can check them out here! 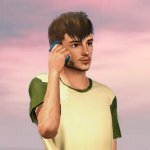 Onverser Posts: 3,266 Member
October 2021 in The Sims 4 Speculation and Rumor
I'm surprised there isn't any threads on this at the moment, but they've announced the second expansion of the year in mid-October for the past three years so I'm hoping we'll see something of the next big release soon. Feel free to share any speculation here
4