What Storylines Are You Playing? 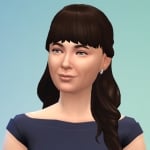 elanorbreton Posts: 12,079 Member
February 2017 in The Sims 3 General Discussion
I currently have 2 games on the go. One is in ts4 and is a live-in nanny who moves from family to family to help look after babies, toddlers and kids. She is currently living in a house of vampires, looking after a new baby and toddler. I am thinking of turning her so she can get revenge on her abusive ex-husband by locking him in the basement as a regular food source

My other game is in Riverview, where I had a widowed guy raising his young son alone and he finally found a new love and they all moved in together and had another baby. Not quite sure where to go from there. I also want to play some games in Appaloosa Plains and Sunlit Tides and Sunset Valley. I need some new ideas to get me started on something so I can feel attached to my new sim(s) in these hoods and excited about where the story is going.

Can anyone tell me (briefly) about their own stories please?
4