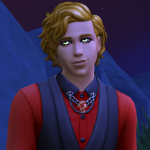 cyncie Posts: 996 Member
January 10 in The Sims 4 General Discussion
Ah, welcome weary traveler to my humble establishment. What is this place, you say? Look around and observe. This is my little spot for the fantasy, supernatural and sci-fi simmer. Do you need advice about repelling vampires? We have that here. Are you frustrated that you can’t seem to find fairies or werewolves in Windenburg? We understand. Are alien abductions and a severe lack of dragons getting you down? You have our sympathy. Are you a Spellcaster struggling with curses? Ugh. Have a drink.

New developments in our world occur once in a blue moon. In the meantime, you can share your supernatural needs here. After all, I’m just your friendly bartender. Aren’t I?

Tales From The Myst
13