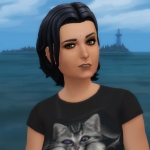 
If anyone thinks of something that I missed you can comment on the blog post or on the thread here. Thanks! Rules adapted from StardustX’s original rules:
You cannot build any kind of shelter for yourself until you have earned the simoleans to do so.
You cannot have any electronics or appliances or cell phone access (put it on silent) until you have a home. (At least 1 kitchen, 1 bath and 1 bedroom)
You can’t have a part-time job. You can’t have a full-time job when you are a young adult until you have a home. (At least 1 kitchen, 1 bath and 1 bedroom)
You cannot cook/shower/etc on other people’s lots or interact with adults until you are a young adult. You’re a runaway they’ll report you as such. If your social meter gets low, you can interact with children or other teens.
You can shower and use the bathroom at any public place like the gym.
You can fish, garden and dig all you want and sell them.
You can’t go to school. You have to cancel go to school each day. This will not affect traits.
Each time you travel you subtract $10 simoleans from your funds using the money cheat.
The goal is to survive. There are no “points”. You are simply trying to survive, start a new life for yourself. You should aim for having a high paying job, children and a big house. The main thing you are doing is getting money the old way by fishing, gardening, and collecting.

Updated: The game now allows you to have a teen-only household starting in the 3/23/17 patch.
In the years since I’ve adapted this challenge, I’ve only seen a few people actually make the 10×10 area on their lot. I can’t blame them. I was just trying to find a way to stick to the Sims 3 rules as much as possible and in that game, you could create a 10×10 lot. So forget lot sizes! Putting in a bunch of landscaping to box in an area makes the bills high.
If you opt to make the teen look grungy and unkempt (which is kinda hard in Sims 4 without CC anyway) then you should “buy” them nicer clothes in CAS as soon as they’ve made a little money. Looking like a bum will attract too much attention.

There is no camping area like there is in Outdoor Retreat. And, assuming your teen will be spending the bulk of their time in the jungle and cannot return home except on the weekends there will be a little world editing needed before leaving for their trip!

Bulldoze the smallest cabin lot to rent for your time there. There is access to all of the amenities you will need all over the place so if you’d like you can leave this lot with nothing on it. If you’re set on having a home-base of sorts you may add some items to the camp. Before you leave for your trip you will need to make some money and subtract the cost of these items: An outhouse or fenced in area with the cheapest toilet and shower, a grill, and a picnic table. If, and only if, you don’t own Outdoor Retreat and thus don’t have access to tents you may build a small shelter for a cheap bed or hide it behind some foliage or a fenced-in area.
You may add to the cantina lot a computer to purchase a poison antidote (§1,000!!!) or skill books and a single GT bar game such as darts.
You may add a woodworking table to the museum.
Everything else should be portable items. (Your teen has a bunch of large rucksacks that they carry the things in and/or hides away.) The following are some suggestions: yoga mat or meditation stool, guitar or violin, camera, journal (mood swings in jungle eek!), any camping gear such as a tent, cooler, and portable shower, books, and if you elect to have a pet a portable bowl, ball, bed, and litter box if it’s a cat.
Personally, I’ve always considered Granite Falls to be close to the regular neighborhoods. Perhaps a bus or train ride away and there are usually the same sims from the ‘hoods camping there. In this, Selvadorada is different. I’d think they would need to take a small plane or helicopter to visit there. And the locals are used to seeing tourists and don’t take much notice of them other than to sell their wares and tell their tales. So, for trips there only- you may converse with local sims older than a teen. If you are unsure if they are a local introduce yourself and if they are there will be options to ask about the jungle, etc. If not say goodbye and walk away.
Your teen can visit only occasionally if you want but if they will spend the bulk of their time there the following applies… Your teen may return home to their lot to stash their treasures and work on their house on weekends when the other teens are out of school and they won’t draw notice since the sims in the area won’t be accustomed to seeing them around. If you’d rather wait until the end to build the house and pretty much live in Selvadorada and just build all at once you can.
Get Famous Alternate Rules…
Your teen ran away to seek fame and fortune.
In this case, perhaps they are just estranged from the family and not hiding from them.
You may use the music and video production and drones to earn income and fame.
You may “fangirl” over the stars since that’s a very teen thing to do.
As you are still trying to keep a low profile since you’re not attending school, you shouldn’t go out of your way in public to draw attention to yourself such as playing instruments in clubs.
There are no points. There is no endgame or goal other than building a nice home/apartment for your teen. Most people continue playing their teens once they are young adults. Some have used them as the founder of legacies or other challenges. This would be a fun way to create a background story for your founder since you get to play it out.
Post edited by Rainydayz179 on March 2019
Stormy Dayz Gamez
My Twitter