White
Sign In · Register
Home › The Sims 2
May 29 - It's Friday. What does that mean on The Sims forums? Time to highlight some awesim discussions! 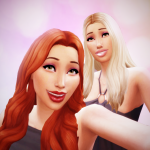 Magnezone Posts: 202 Member
April 12 in The Sims 2
I was debating whether or not to put this on TS2 board or TS3 but I feel more people here would care about maxis pre-mades.

I don't see many people discuss this, but Kaylynn Langerak, Pleasantview and general default maid, reappeared in The Sims 3. She is a child in Sunset Valley, where Michael Bachelor is a teen (dead of old age at the start of TS2) and Mortimer Goth is also a child, whereas in The Sims 2, she is an adult near the start of her life cycle.

I have 4 theories for this:

1. The Sims 3 Kaylynn is not The Sims 2 Kaylynn. She is a relative or just happens to have the same name. I particularly like a sub-theory of this that I read on the wiki once. That Parker, Kaylynn's brother, named his daughter after his sister. And that way the ages would check out too.

2. Time travel. I mean Don travelled back to Riverview. What stops that happening to the Langerak family?

3. Kaylynn drank elixir of life. And I mean, a lot of it.

4. Maxis didnt care about the discrepancies in age and just wanted to make a nod at The Sims 2. Most likely theory, but that's no fun, is it?

So what do you think happened to Kaylynn between the events of The Sims 2 and The Sims 3?
My blog full of things that never get finished!

Magnezone, the lover of Calientes, Lotharios, Landgraabs and Curiouses everywhere.
0