Sims 4 Worlds and Their In Real Life Locations

lemonade578 Posts: 75 Member
July 2019 in The Sims 4 General Discussion
Hey! After looking at the beauty that is Sulani, I was wondering where the worlds in-game would be in the real world. Luckily, I made a map to show where they would be! 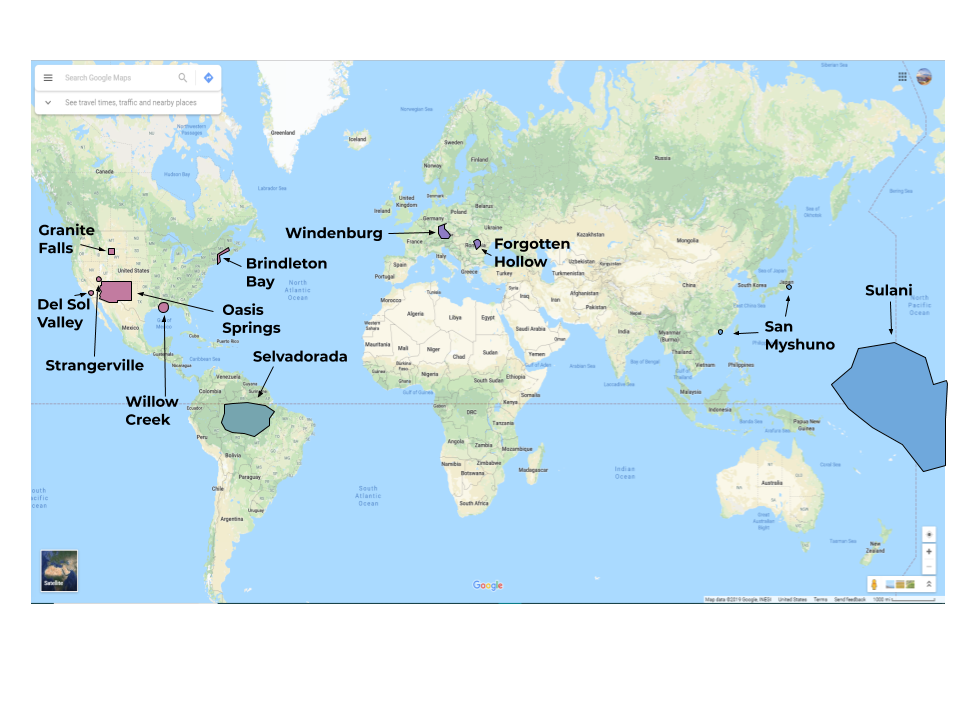 Let me explain... (in alphabetical order)
Brindleton Bay: I put Brindleton Bay in the U.S. region of New England. The aesthetic of the world just screams "New England!" to me!

Forgotten Hollow: Ok... this one might be controversial. No real life location really fits this world. I chose the Transylvania region of Romania. I know the region does not really look like Forgotten Hollow, but based off of movies it fits.

Magnolia Promenade + Newcrest: There was no real place that came to mind with these worlds, other than the general United States and Canada. They are not on the map for this reason.

Oasis Springs: I chose the U.S. states of Arizona and New Mexico for this world. I debated choosing areas of Mexico, but I am not familiar with the region enough to pin point it.

San Myshuno: This one was hard. After looking online, I chose the areas of Tokyo, Japan and Hong Kong. Tokyo because of the architecture and Hong Kong for the geography. Many neighborhoods of San Myshuno do not fit in Tokyo, but I see Tokyo as the best fit for architecture.

Selvadorada: The Amazon Rainforest really looks like Selvadorada. Having my sims go to the Amazon is a fun idea to me!

Sulani: Sulani looked like a Pacific island. It gave me Tahiti and Polynesia vibes. I also got a bit of Hawaii from this world too.

Willow Creek: Due to the steamboat, the swampy backdrop, and the trees, I chose New Orleans, United States as the location for Willow Creek.

Windenburg: This world gave me a central and southern Germany vibe, but with a bit of Austria too.