White
Sign In · Register
Home› Feedback› The Sims 4 Game Feedback
September 18 - Everyone ready for the Friday Highlight? It's ready for you here!

The Lack of Representation of Gay Male Couples is Disappointing 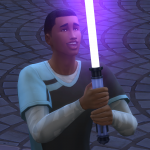 Simtanium Posts: 118 Member
August 11 in The Sims 4 Game Feedback
The Sims franchise has always been extremely welcoming and open to its gay and lesbian audience, allowing players to create same-couples since its debut; something which the franchise has stuck with - and expanded upon - ever since. With TS4, EA/Maxis has become increasingly vocal about their support of the LGBT+ community - going so far as to include Pride content in the game, adding new gender options and using same-sex couples in their marketing. While to some this may seem like no big deal, and just the right thing to do, I believe that EA/Maxis should be applauded for doing so. It was actually an extremely big deal (especially in TS1/2 and perhaps even 3 days) to allow the option to create and play as same-sex couples, given that The Sims is sold all over the world (including the Middle East, where homosexuality is illegal in many countries). And even just in the western world, attitudes towards being gay were far less accepting in the early 2000s than they are now.

For me, growing up gay, it was extremely affirming for me to be able to create gay couples in my favourite game; allowing them to get married and adopt a family - something which I aspired to (and still do). And while this is all fantastic on the Sims teams' part, there is something about the Sims 4's (and 3's) handling of gay Sims that feels off to me. 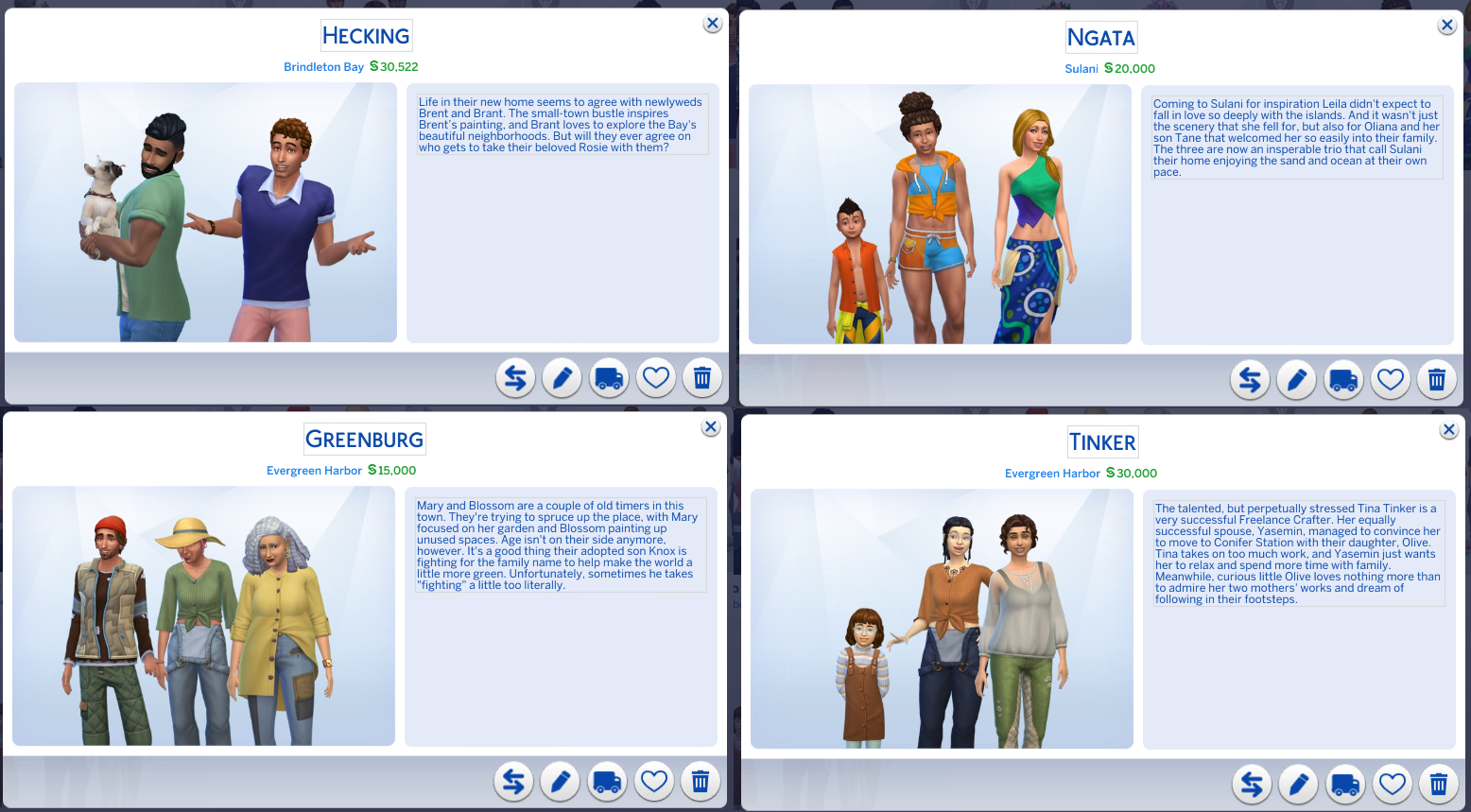 ]. The Hecking family seems to play on several stereotypes and tropes that plague gay characters in media: that gay men are self-absorbed and only have time for themselves, so would not make good parents but instead settle on a cute, little female dog that is their "baby"; that gay men are all attractive, athletic, fashion-forwards guys with great hair and tight shirts; and even their names "Brant" and "Brent" seem to suggest a comedic double-act that is used for light entertainment. Each of the lesbian couples have diverse stylings and backstories, and the inclusion of a child gives the impression that they are a "real family." But the Heckings are stuck in the trope of the catty reality TV contestant or Taylor Swift backup dancer - in short, everything you would want in your sassy gay neighbours.

A Quick Detour to TS3 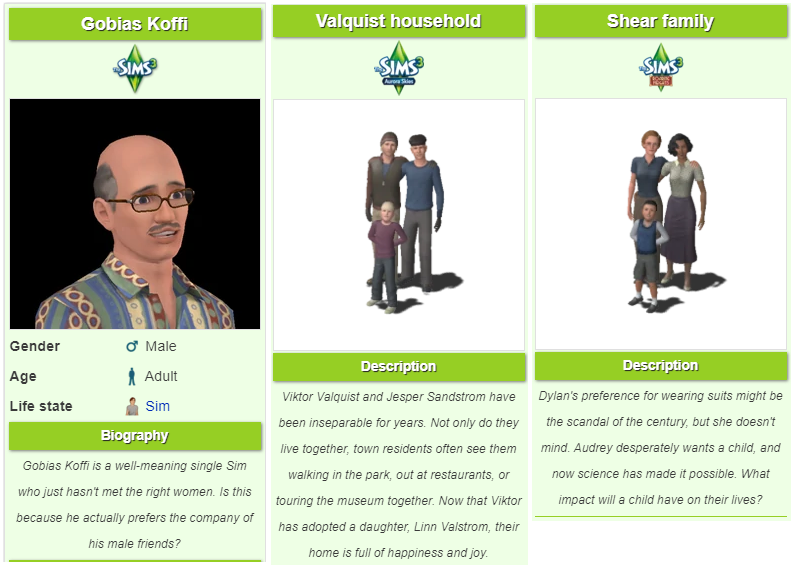 Going back a little to TS3, it's pretty clear that the seeds were already firmly planted. The base game shipped with Gobias Koffi - a strange, camp-looking man with a moustache and loud shirt who lives alone, prefers the company of his male friends and has a dead father named "Gaylord." When Aurora Skies came to the Store, many thought that the Valquists were going to be the first same-sex couple. Their bio proved otherwise, however; painting them the way a family member who has not accepted their gay uncle and his "friend" would - "they're inseparable," "they even live together," "one of them has adopted a daughter." In-game they were simply classed as 'friends' with only one man being their daughter's father. We didn't have to wait long for our first same-sex couple, however, as the Shears, a lesbian couple, came in Roaring Heights. While the Shears' bio mentions some prejudice the couple will have to face, they are shown the dignity of being classified as a couple and of both being mothers to their child in-game; unlike the Valquists were. 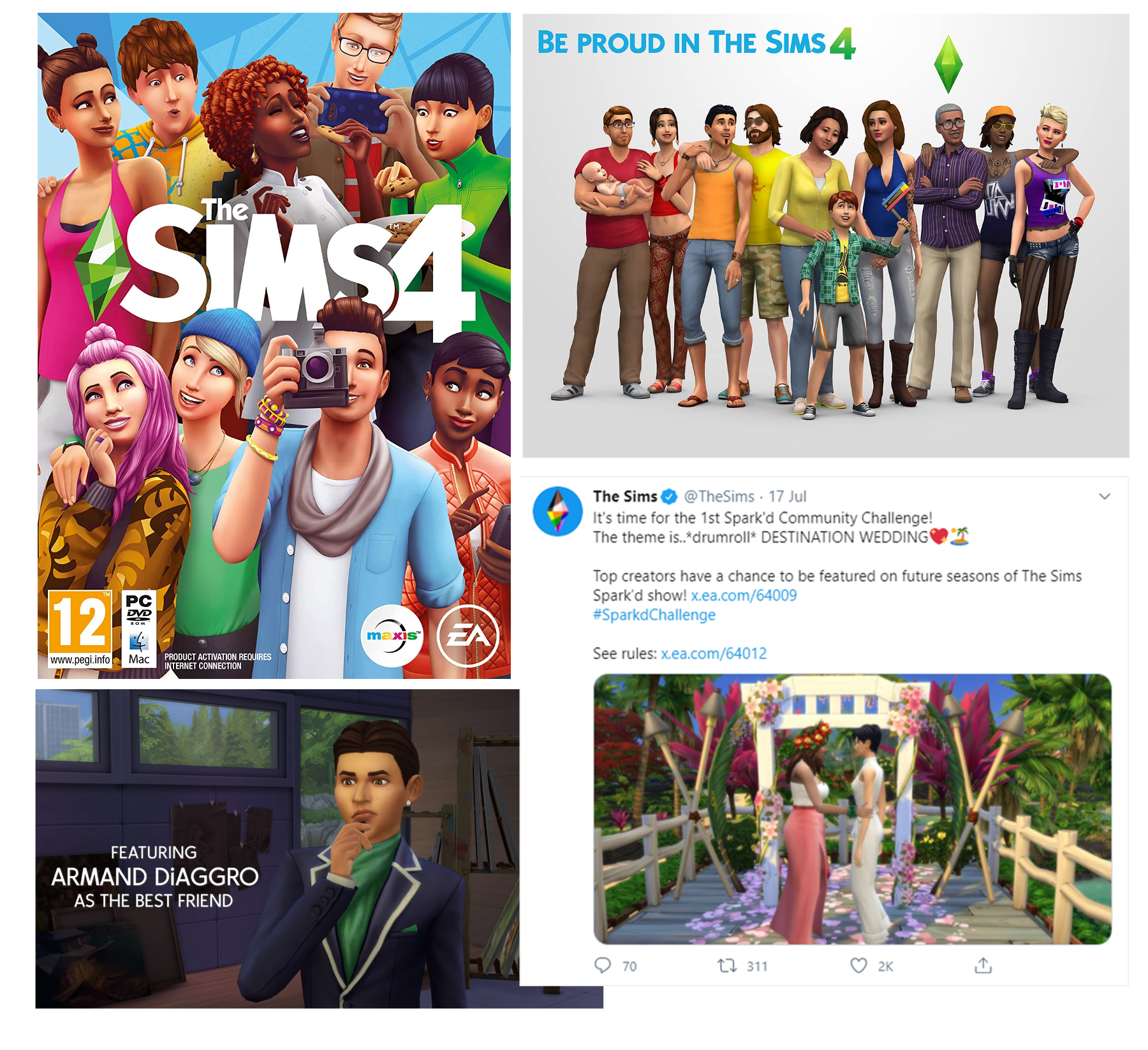 Just like with pre-mades, TS4 seems to favour female same-sex couples in its marketing. The new re-branded cover includes a lesbian couple, and a lesbian couple was used to advertise the first Spark'd assignment (as was a male/female couple, but notably no male/male couples). When going back a little further, the Pride promo shot included a male/female, male/male and female/female couple. Yet, once again, the male/male couple was the only couple not to have a child; reinforcing the theory I introduced earlier. And even further back than that, when TS4 was first launched, one of the gay Sims from the Pride promo shot was included in several promotional videos for the game. While he was never shown with a partner back then, Armand DiAggro was always stylised as being quite flamboyant. In the 'It's Amber' video, he is introduced as 'The Best Friend.' This seems to be a play on the gay best friend trope. Instead of being a fully realised character, he is simply used as a comedic side character; living up to the stale stereotype of the gay best friend who goes to your slumber parties and offers you boy advice.

This thread isn't meant to attack EA/Maxis or any of the devs, or to suggest that they have any sort of bias. I know that the company has an extremely diverse team, and like I have previously said, they deserve applause for their handling of LGBT+ inclusion throughout the series. My intention instead for this thread was to share my perspective and to invite dialogue from anyone who would like to discuss this topic, to highlight representation issues that are not exclusive to the Sims but to all media; and to hopefully encourage the devs to one day include a gay couple that has a family and that does not rely on any stereotypes or tropes.

If you disagree with my post or are not interested in this topic, please respond respectfully or just move on from this topic. Thank you.