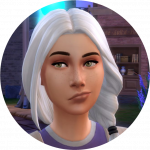 What would happen if we looked in on the lives of the premades roughly 10 years after we originally met them?
What job would they have, if they have one? Would they still live in the same place? Who did they marry - or would they still be married to the same Sim? Did they have any (more) kids? Basically, all the important questions in life

Anyway, I started this project (which I called "Premades 2025"), by making use of full edit mode in CAS to take a look at the Sims and their offspring. And I used the existing backstories and my imagination to write them a follow-up backstory.

Most Sims in this project will be in the life stage after the one they were in originally. Except some of the adults. I think the adult life stage is disproportionately short, so I just made some of the adults look older and some of them are actually elders (often depending on what would be "realistic" considering the age of their kids). Just mentioning it to avoid any confusion on the subject.
They won't neccesarily be completely at the start of that life stage, because, realistically, a teen who was originally about 16, would be 26 about 10 years later and not 18 or 21 (whenever you reckon the young adult stage starts). With that in mind I worked on this project, so a Sim who was originally a teen, like Cassandra Goth, may already be married and potentially be parent to a toddler, yet they may also be single.

The way I've set this up is that I'll post one of the new families/households each day on my Simblr. But as I wouldn't want you guys on the forums to miss out on this, especially because the premades are quite popular/known around here, I've decided to make this thread. I'll try to update daily, but might not always be able to.

If you don't want to wait, you can read this series on my Simblr, it posts at 20.00h (CET summertime) every day.
I already have the first post up, so I'll copy it to this thread in a minute.

I hope you have fun reading all this