White
Sign In · Register
Home › The Sims 3 › Creative Corner › The Sims 3 Stories and Legacies
February 28 - No Friday without a Friday Highlight! Find this week's here. 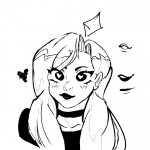 Lufferkinzify Posts: 2,990 Member
June 2011 in The Sims 3 Stories and Legacies Hello! This was supposed to be posted last night lol, you can blame my mom for that! For those of you who don't know what roleplay is, it's where you pretend to be another character (or in this case, sim). Forum roleplaying is a text-biased roleplaying game! To see some examples, go to the MTS Roleplaying Forum! 1. All Sims 3 Forum rules apply. The forum rules are located here for those who haven't already seen them.
2. When talking Out Of Character (OOC) use brackets: (text), ((text)), [text], or text.
3. Please try to limit OOC use though, we want to RP here!
4. Please be friendly - just because our characters hate each other, doesn't mean WE have to hate each other!
5. No Mary Sue/Gary Stue. That is a form of overpowered characters in the RPG world. Mary Sues are girls, Gary Stues are guys. This is also sometimes called god-modding. Try to avoid "perfect" characters.
6. Your picture of the character must be a sim. (Since this is a HS RP, a teen sim). Optional - post a picture with each RP post.
7. You can have up to 3 sims/characters per user.
8. Let loose, be creative and have fun!
**Follow these rules or you will be asked to leave the RPG** Welcome to Sunset High, in Sunset Valley. Here, you are a freshman just leaving junior high. Many adventures await you, and it all starts in the halls. In high school, if you don't want to be left alone, you need to be apart of a clique. Cliques are groups of kids that share the same interests. Here are the cliques, feel free to suggest more.
Jocks - Your typical athlete. Participates in a varsity sport, is well-liked and popular, and has practically everything handed to them on a silver platter. The guys are regular Casanovas, with girls tripping over themselves to get their attention. However, they have a reputation for being a bit on the duller side, and are seen as meat-heads who never use their brain.
Preps - They are the fashionistas, the most popular kids, the cheerleaders, the rich kids. Known for being very beautiful, very well dressed, but also incredibly shallow and manipulative, as well as self-centered and egotistical. Furthermore, they’re often outrageous flirts and teases, constantly playing with the emotions of others.
Rebels - These are the kids you don’t want to mess with. Tough as nails, they walk around with a huge chip on their shoulder, prepared to strike at anything that dares to cross them. They are known for being somewhat antisocial and aggressive, but they possess the smarts that the equally brawny jocks may lack. However, unlike the jocks, when they start fights — they are almost always the ones to get the blame. If you’re a Rebel, chances are that you’ll be spending a lot of time in detention.
Achievers - These are the brilliant kids; the ones who will be owning the multi-million dollar corporations when they’re older. They ace all their tests, get practically all A’s, and never miss a day of school. Despite their impeccable work ethic and standards, they are often given the label of nerds, geeks, and teacher’s pets. Although they may be picked on in high school, they’ll probably be the ones having the last laugh.
Skateboarders - These students a the most laid-back, relaxed kids in school. With their mellow and calm attitudes, they hardly let anything phase them and never go out of their way to create drama. They’re known to be the slackers, and this is often revealed through their grades. While they may not be stupid, they certainly aren’t geniuses. They spend most of their time practicing their moves in the school parking lot.
Goths/Emos - The perpetually troubled, deep, emotional kids. They don the darkest clothing they can find, wear thick, heavy, and dramatic makeup. Often, they are incredibly pale. These are some of the most artistic kids in school, however. Be it poetry, painting, or music, one thing is for sure—they’ve mastered one type or the other, as a means to express their angst and deepest emotions. Sadly, they are often given the label of freaks, because they can be misunderstood.
Normies - The average kids. They don’t really stand out in any particular thing. They’re not over-achievers, but they’re not under-achievers either. They show up to school, make their way through the day, and maintain a balance between school and their own lives. Because they are labeled as boring, they often blend into the background, not really fitting into any one clique. The normies are often the wallflowers, but when you get to know them, they often bloom before your very eyes, or shrivel up and prove they’re as boring as they seem.
Oddballs - The exact opposite of the Normies, the Oddballs stand out like a sore thumb. People can point them out a mile away, with their eccentric clothing and their loud mouths. Lighthearted and outgoing, they talk to anyone and anything that crosses their paths, not fearing social boundaries. While their free-spirited nature and unique ways can be a good thing in its own light, they are often looked down upon by others and labeled ‘obnoxious’ or simply 'out-there'.
Free-roamers - These kids aren't really apart of a clique - they just simply get along with a lot of different kids. Whoever they're hanging out with, that's their thing today. However these kids don't really have their own interests - they find their passion through other people. "Go with the flow" is their motto. Though it is not nessecary to have an after-school activity, if you must have one, here they are. You can have up to 2 per student Feel free to suggest more.
Drama, either Acting or Tech Crew
Yearbook
School Newspaper
Student Commitee
Football
Basketball
Cheerleading
Soccer
Art Club
Band, if you join, please say which instrument
Chorus
Anime Club
Video/Moviemaking Club
Foreign Languages/Culture
Book Club
Key Club suggested by Rhett9. Do charity work and help the needy.
Surf Team suggested by gagamummy
Dance Team suggested by SilentDancer
Swim Team suggested by Shannachka