Leave YouTubers out of our trailers please 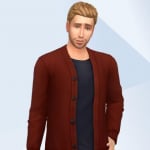 sims2freak737 Posts: 2,363 Member
August 2019 edited August 2019 in The Sims 4 Packs Discussion
I'm pretty excited for The Sims 4 Moschino Stuff Pack but I wasn't too happy to seeing Joey Graceffa in the trailer. I was fine with The Sims having him announce the Pride items but I do not need to see him invading more aspects of The Sims.

I know this seems like a super trivial thing to be upset about but I feel like The Sims team relies too heavily on YouTubers to sell their products for them. It leaves a bad taste in my mouth watching The Sims pander to people that already make a pretty decent living off their videos and allowing them to profit more off their product while I feel like all of us on the forums are constantly ignored.

I think the clothes from the trailer look fun and unique and I am looking forward to getting this pack. Will I buy it full price at release? Highly unlikely. But it will be a pack I'll keep my eye on for sure.
Post edited by sims2freak737 on August 2019
44