White
Sign In · Register
Home› The Sims 4 Modding & Custom Content› Tutorials and Tools for Mods & CC
May 28 - It's time for our Friday Highlights! You can check them out here!
Sul sul Simmers! Join us for the #DreamHomeDecorator Livestream HERE today, May 25, @11 AM PT / 6 PM UTC! 🎉
May 27: Today is patch day! 😃 To read the patch notes, click here! 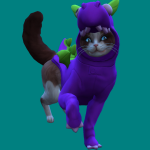 chealsycat Posts: 2,931 Member
April 11 in Tutorials and Tools for Mods & CC
I've been playing The Sims 4 since 2014. But I haven't used any CC/mods yet. I'm scared to crash my game as I don't have any idea how to use them.
However, the further the more I can't go without CC. As a video maker I need animations first of all.

But what to begin with?
What programs are musthave for every CC/mods user? Where and how to install them?
I badly need your advice as I know nothing about mods/CC.
Can you help me and explain with very simple words what to do? 🙏 Also, I'll be very thankful for the links to useful tutorials for the very beginners.

https://www.youtube.com/c/chealsycat
One day you will regret
46 seconds
0