White
Sign In · Register
Home› Off Topic Chat
Sul sul Simmers! For 24 hours, starting on 6AM PT today, May 6th, you can share what's on your mind in the Sims 411 Feedback thread for the next Inside Maxis livestream. 😃
April 30 - It's time for our Friday Highlights! You can check them out here! 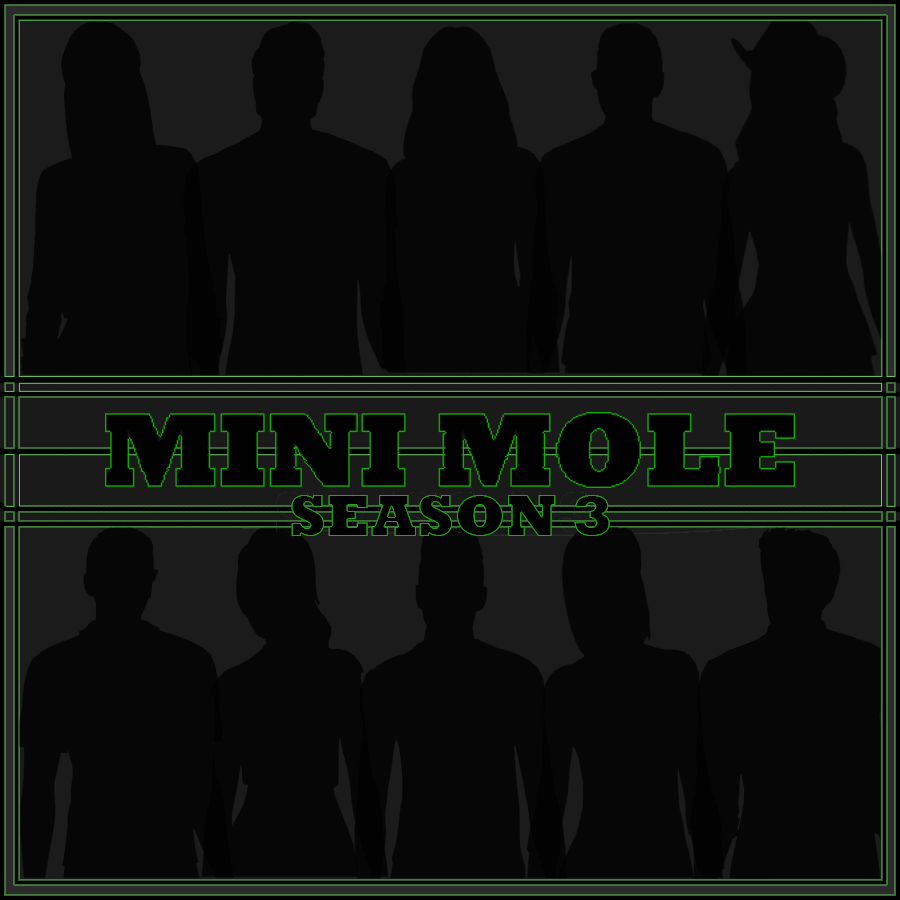 Welcome to Mini Mole: Season 3!
An interactive reality gameshow made in the Sims 4, based on the awesome show "De Mol", and a spin-off from @Turner's Sims 3 "The Mole"!

How The Show Works
The show is an interactive reality gameshow, which is like a story mixed with forum based / real life roleplaying. I act as the host of the show and create the story in the form of scripted episodes, as well as set up and mediate the real life components of the game from the forum user contestants. The contestants each submit a sim in which they would like to be in the show, and that becomes their character. However well that user does in the real life game, depicts how well their character does in the episodes and show! If you vote Bob as The Mole, your sim will vote for Bob as The Mole! When a real life player is eliminated from the game, their sim is eliminated from the show too. The forum game dictates the story!

How The Game Works
This game is based off of the real life (and totally awesome) show called "The Mole". The Mole originated in Belgium and has found success in places like The Netherlands (with WIDM), The US, Australia and many places over the world!

The game is about 10 contestants working as a group to add prize money to a group kitty that only one of them will eventually win at the end of the show. However, among the 10 contestants is a saboteur: The Mole. The Mole is the contestant picked by the producers to secretly undermine and sabotage the group's money-making efforts. Their job is to covertly stop money from going into the kitty by sabotaging the challenges. At the end of every episode, the real contestants take a quiz about the identity of their secret Mole! The player who knows the least about the identity of the Mole will be eliminated, until only one contestant is left to unmask the Mole's identity!

The Role of The Mole
The Mole is one of the 10 players who must sabotage the challenges and stop as much money going into the group kitty as possible. All money that doesn't get earned by the other 9 genuine players, goes straight into The Mole's pocket at the finale. However, The Mole doesn't want to be caught out for their actions, as the players are constantly on the lookout for their identity in order to make it to the finale themselves! Other player's may pretend to be The Mole, but there is only one Mole for the entire season. They will not be revealed until the finale!

The Forum User playing the Mole will have the ability to choose how and where their sabotages will fall in the challenges. Unlike the other players, they are not at the mercy of limited sabotage opportunities, and will be given insider information as to what they might be doing. Since they are not searching for The Mole, this user is just trying to blend in as a regular player to avoid being caught out, while trying to keep as much money out of the kitty as possible!

The Role of The Contestants
This season, there are 9 genuine contestants who aim to be the last player standing and earn as much money as possible by participating and succeeding in group challenges. The more money they earn in the challenges, the bigger the prize money for them if they win at the end! Their goal is to not only win money by succeeding in challenges, but it is also to discover The Mole, as after every challenge there will be a quiz to determine who knows the least about the identity of The Mole. The person who knows the least after each challenge WILL be eliminated from the show and cannot win the prize money. Since this is a hunt for The Mole, and only one player can win, the players will no doubt sabotage themselves, act suspicious and pretend to be The Mole, to throw their competition off the scent! The last player standing, takes the pot!

The Forum Users playing as regular contestants will be searching for the identity of The Mole amongst them. After every challenge episode, they will do a ranking of all the contestants from most suspicious to least suspicious. The person who ranks The Mole the lowest WILL be eliminated.
The users will also be able to give input as to what positions their character will play in each challenge, as well as be given a few opportunities to sabotage the challenges to look suspicious at the cost of money! Every time these players don't sabotage, money will be added to the kitty!

The Quiz
After every challenge, the genuine contestants will be taking a quiz to determine who knows the most about who The Mole is! This will take place asking questions about The Mole's identity and what they have done in the previous challenge. The final question of the quiz will be "Who is The Mole", and the answer will be a ranking of all the contestants from their biggest suspect, the person they think is the Mole, to their least suspected player. The player who scores the least in the quiz about The Mole will be eliminated. In the case of a tie, the person who scored the Mole the lowest on the ranking will be taken into account; If this does not prove to show an answer, The Mole will make the final decision.

The Finale
One 7 of the contestants have been eliminated, we will be left with only 3 finalists. One finalist will win the show and all the money the group earned, one finalist will walk away with second place and no money, and the last finalist will be unmasked as being the sneaky little Mole!

Strategy
As players, you are free to pick your own strategy to get to the finale! This IS a competition and a game! You may choose to sabotage and make others think you are The Mole OR you might want to focus on finding The Mole yourself to be the last person standing. The game is yours to play!

Diary Room Entries (DRE's)
The forum uses are allowed to make DREs where they may roleplay as their sim. It is optional! Their sim will be allowed to spend time making entries in a "Diary Room", in which they will talk one on one to a camera. You can speak in the eyes of your sims about the game, other players and suspects, or about events of the show. The DREs will appear in the episodes of the show! Simply send a private message with what you'd like your sim to say to the camera in the Diary Room. You have free reign over what your sim says and does but please do not make them over the top, offensive to real life players or the show, or feature controlling or "god-modding" of other people's sims. Any DRE is NOT guaranteed to make it into the following episode if it is not deemed fit.