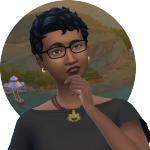 ElenPink Posts: 541 Member
June 2019 edited June 2019 in Off Topic Chat
At last, a Sims competitor might be coming to town!

This game developer named Alex Masse is developing another life simulation game called Paralives. You can follow him on twitter @_amasse. He has a few GIFS of his progress, and it looks great so far. I am also supporting him on Patreon.

Also, I know the graphics don't look amazing, but I don't think I need to remind people that it is very early in development. TS4 did not look like how it looks now while it was being developed.