The sims freeplay toddlers are so lucky 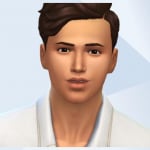 marcel21 Posts: 12,341 Member
May 2016 edited May 2016 in The Sims FreePlay
Toddlers can play with so much stuff you could open a brilliant toy store for the sims 4 if the creators had included them and took tips from the past Sims games and even freeplay.

Not to mention the most independent than in TS2/TS3

Use items in the fun fair and things in the other lots and lots of clothing you can. Collect with completing skills.

And use a lot of basic household items without help and even eat normal food at a normal table,interactions with pets and watchingTV on the sofa