White
Sign In · Register
Home› The Sims 3› Creative Corner› The Sims 3 Builders
Sul sul Simmers! Join us for the Inside Maxis Livestream HERE today, October 26th, @11 AM PT! 🎉
October 22nd - It's time for our Friday Highlights! You can check them out here! 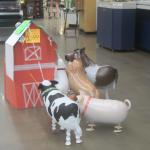 LadyGreenEyes Posts: 922 Member
June 2014 in The Sims 3 Builders
Remember those gnomes that built an amusement park, then vanished? Well, they made a reappearance, and have created a new and even more fun-filled park, which they named Llamaland Amusement Park, after their favorite animal. Rumor has it the gnomes might actually be around this one someplace, too! What's in the park, you ask? What isn't??

The front entrance is graced with two amazing flying llamas.

The Monster Roller Coaster is a big hit with visitors.

It twists and turns and loops!

The Monster is a ton of fun!

An old favorite, the Ball Pit Jump Zone, is back.

There is a Big Top Show Stage.

Rumor has it you can whack on some evil clowns in that area, too!

and a Bull Ride.

The park features a Kiddle Carousel.

The ever popular Rocket Ride is back.

For the more daring, the Gyroscope Ride awaits.

The Medieval Area has lots to do, with the main attraction being the Black Knight Roller Coaster. A Jester Slide is near the entrance.

There is a Spooky Zone, with a Haunted House,

Gnome Maze (and the gnomes from Seven Gnomes park might be inside!!!),

That's just the rides, folks! There are other attractions as well.