White
Sign In · Register
Home› Creative Corner› The Sims 4 Challenges, Stories and Legacies
August 12th- It's time for our Friday Highlights! You can check them out here! 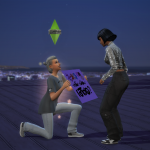 TeeSea Posts: 989 Member
March 21 edited August 13 in The Sims 4 Challenges, Stories and Legacies
A Not So Berry Story Collection:

I would like to complete 75% of the current generations goals before they have children so that the next generation can be the main played sim from a young age. I also would like previous generations to be around for a while hence the longer lifespan.

Not So Berry Challenge Official Rules