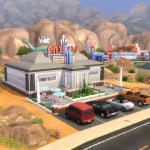 tatselk Posts: 369 Member
December 2021 edited December 2021 in The Sims 4 Challenges, Stories and Legacies
Hi all, I'm starting a Pleasantview 0.5 Project, in which I will be more or less adapting the storyline of TS2’s Pleasantview (ie all the drama with the Pleasants and the Goths) and placing it in TS4’s Willow Creek.

The timeline would be basically set slightly before the events of TS2's Pleasantview. But the ages of the Sims won’t exactly match up.

The project is supposed to start officially in 2022. But I will start posting some stuff here in the meantime.

For Sims, Sims Builds and Other Things (Old Blog)

For Sims, Sims Builds and Other Things (New Blog)
1