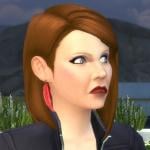 My 7 year old niece wants to play Sims, but the content is too mature for her and the game is just too hard. She likes to dress up the Sims and follow them around. Do you know of any kid-friendly games that she might enjoy?