My sim did NOT look like this when I created her! 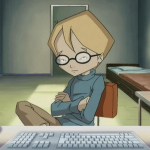 wolfkomoki1 Posts: 4,961 Member
October 2014 in The Sims 4 General Discussion
EWWW! What happened? She didn't look like this when I created her! Help me hatch this