Using lots of images or hitting us with an absolute novel? Please be courteous and use a spoiler tag for your post. Thanks!
The Sims 4 will be FREE to download across PC/Mac & Consoles on October 18! More info here: here
September 23rd- It's time for our Friday Highlights! You can check them out here! 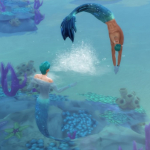 Metior_Ice Posts: 1,942 Member
October 2021 edited June 16 in The Sims 4 Challenges, Stories and Legacies
Edit: This started out as sharing an idea for a potential Legacy, but this thread has become a place where I keep my rotational stories together. The challenge I created will be a significant part of the thread, but it won't be the only story told here.

I'm sharing my idea for a Legacy Challenge. I left things vague so it can be adjusted to fit different playstyles. No Mods are Required. I'll also be sharing my legacy story for this challenge here. I've tested a lot of the elements of this challenge, and I think the only part I might modify is the Purple Tail challenge.

The Heirs and Founders will not die from Old Age, but Death will not be turned off

Each Founder and Heir will be a Mermaid or Merman with a specific Tail Color. There should be a total of 8 Merfolk for the challenge with the founder and blue tail having two parts. There should be Two Blue Tail Heirs. The number of merfolk is important because the Founder will be creating a Club to recruit the other 7 Heirs.

Each Rotation will be 28 sim days

Required Packs:
Whatever you want

1. Mermen don’t wear shirts because the extra drag from loose cloth would slow them down in the water. This could prove fatal if sharks were present in the water. For mermaids, it isn’t a very different situation.
2. All merfolk wear skirts because human pants wouldn't survive the shapeshifting transformation.
3. Even if younger merfolk don’t have their true form yet, it is important that they are comfortable in the new attire. Merlings tend to wear similar attire to older merfolk.
4. Few merfolk from Sulani disguise themselves. Any world with a strong connection to the Magic Realm simply don’t require hiding what they were.
5. The purpose of wearing human clothing would be to blend in with humans and hide the existence of merfolk from those who don’t already know they exist. In the World of Sulani, the merfolk attire is more than acceptable to blend in with humans.
6. Merfolk living in Sulani almost never conform to human clothing standards because they are too used to living close to the water and wearing outfits that are functional for an aquatic living.
Post edited by Metior_Ice on June 16
User ID in the Gallery is Metior_Ice.
My Active Discussions
https://forums.thesims.com/en_US/discussion/994423/metior-ices-merfolk-legacy-story#latest
https://forums.thesims.com/en_US/discussion/1000738/what-are-your-merfolk-doing-today#latest
3