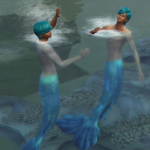 Metior_Ice Posts: 2,171 Member
November 1 edited November 2 in The Sims 4 Challenges, Stories and Legacies
After trying to play through a legacy, I wanted to do something different, something that isn’t related to a specific challenge.

I’m hoping to share my stories here for fun. It’ll be a way to continue writing when I’m unable to work on my personal works.

While there aren’t plans for a rigid plot, I do plan on building off of whatever happens in a previous update.

I’m creating a new thread because I’m telling a new story with a new save!
Post edited by EA_Solaire on November 2
User ID in the Gallery is Metior_Ice. My Active Discussions https://forums.thesims.com/en_US/discussion/1004466/metior-ice-s-merfolk-story-thread#latest https://forums.thesims.com/en_US/discussion/1000738/what-are-your-merfolk-doing-today#latest
4