My Rating on the Sims games. 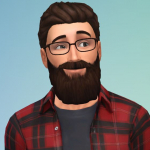 JohnTheSim96 Posts: 42 Member
June 26 in The Sims Franchise Discussion
Hello there simmers! I just wanted to leave my ratings on all the Sims games I have played. So here goes... The Sims (Sims 1), it was a good game, not bad all at for its time, it was fun, I mean it was the first Sims after all and what started the franchise, so thank you EA and Maxis for a master peice of a series. Sims 2, hmm, It wasn't bad but, I didn't really like it much myself, just felt like the Sim creator wasn't good at all, but I did kinda like that you could control your Sim yourself. Moving along. Sims 3, I liked the Sims 3, the Sim creator was nice in this one and the gameplay was good. Lots of options which made the game fun to play. and then Sims 4, of course is my most favriote of all, great Sims creator and lots of fun to be had in this one, not much else to say about it, just that its really great. and here's a honorable mention, The Urbz: Sims in the City, most likely one of the very first Sim games I played and I loved it as a kid, it was a lot of fun and is what got me into the Sims in the first place, I mean, now it isn't as fun since I am older but, still its got some good old memories, the sims creator in it wasn't really good but that didn't stop me from enjoying it, I liked the greetings and stuff that you could do in that game, it was interesting, I spent hours playing it on the GameCube. but anyways, my hands are tried from typing, so, last thing I am going to put is, Sims mobile app, which I just started playing yesterday, its not bad, its alright, good way to kill some time. So, yeah, that's my ratings on the Sims games, thank you, Sul Sul.