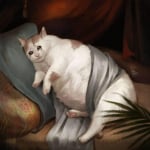 SimGuruConor Posts: 16 SimGuru
January 2021 edited January 2021 in The Sims 4 Packs Discussion
Welcome back to another dev blog about our latest Stuff Pack! This week let's talk about the Seance Table, Paranormal Investigator Career, and an interview with our Art Director!

So let's just get right into it! 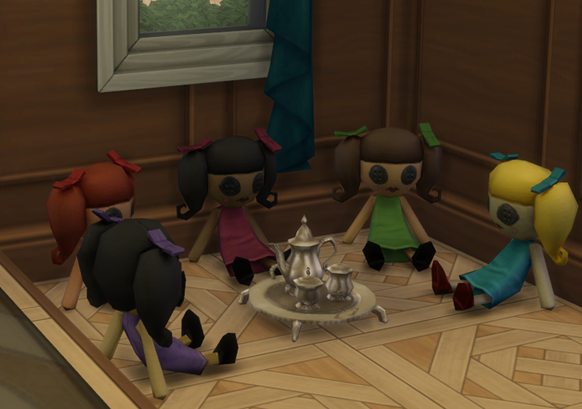 Thanks Doctor Ashely for this horrifying scene.

The Seance Table is here! Talk to ghosts! Scare your friends! Summon the unexpected! This thing is capable of all sorts of spiritual meddling, and functions on any lot!

Your Seance Table can be decorated too! It's a table surface, so feel free to put a Crystal Ball on top, or maybe a Sacred Candle? Slot any chair you want too!

When you use a Seance Table you’ll develop your Medium Skill, unlocking new Seances, the ability to host Group Seances, and the ability to draw chalk Seance Circles anywhere in the world! And if you’re a Spellcaster Sim, you’ll gain skill much faster due to your familiarity with the mystical arts. This skill and the Seance Table are available for Children and older too!

One of the main purposes of the Seance Table is to perform a ceremony that strengthens the spiritual serenity of the house, making it a little less creepy. However, if the Seance is interrupted for any reason, it might have the adverse effect, so make sure your Sims are protected (Hint: Sacred Candles!). 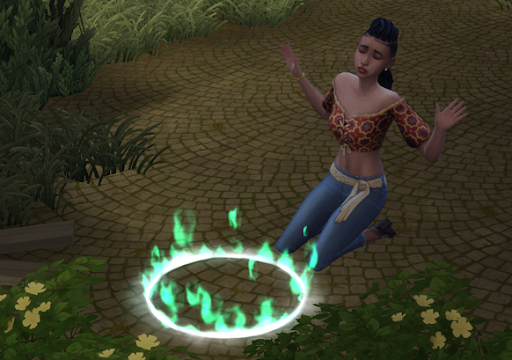 Seance Circles for the Medium on-the-go.

Other Seances include the ability to commune with the dearly departed. Hopefully, they'll offer some sagely wisdom, or perhaps they’ll just insult you. Who knows? Great for parties.

Or if you’re really looking to stir up some trouble, you can also invoke spirits from the Seance Table too. Kind of like a ghostly grab bag, just reach in and pull out something deceased. A great way to spice up any lot, or completely ruin it. Honestly, this Seance isn’t entirely recommended, but since when has that stopped anyone?

Bonehilda is back! She'll clean, fix your electronics, garden, fight fires, lay out snacks, and more! Summon her on the Seance Table or Seance Circle whenever or wherever you need her!

She’ll also be your buddy! As long as your Sims don’t mind being around a fully sentient skeleton that is, but I hear they’re pretty open-minded. Bonehilda won't ask for anything in return either, she’s just here to have a good time.

Summoning Bonehilda is extremely useful while living in a Haunted House, she can help take care of the place while your Sims are preoccupied with other pressing matters. Bonehilda also has a great protective instinct, and will swiftly and enthusiastically show harmful Ghosts the door (with her fists of course). 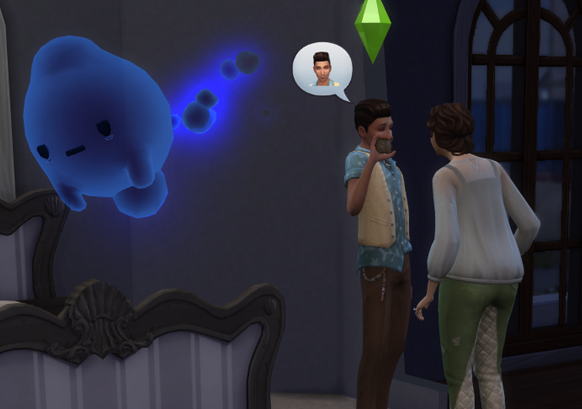 This career is aimed for Sims who have mastered the paranormal and will have to use everything they’ve learned while living in a Haunted House to their advantage.

The gigs for this career are pretty straightforward. You’ll be sent 3 gigs to choose from, either an Easy, Normal, and Hard Investigation. Once you select your preferred difficulty, you’ll be instructed at 9:30 pm to go out on an investigation to an undisclosed location.

Where will the investigation take you? Anywhere! (Well any residence at least!)

Sometimes the Pankcakes will have a bit of a Specter infestation, sometimes Goth manor will need an exorcist. It's your job as a Paranormal Investigator to go wherever the action is, and snuff out any unwanted spirits.

It ain't much, but it's honest work.

You also won't just be sent to premade Sim houses, but also your own created households! Your other played Sim families might be in need of a spooky exterminator too! And don’t worry, the house won't be permanently haunted either (You’ll have control over that with the Haunted Lot Type!).

Finishing these gigs on time leads to all sorts of weird and strange rewards. Feel free to hang up your Specter-in-a-Jar as a trophy. Or amass a collection of exorcised dolls! There’s tons of strange stuff to acquire! 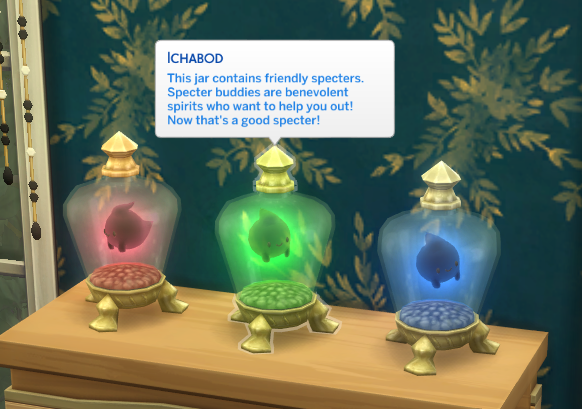 Since this is a freelance career, feel free to take these gigs whenever you feel inspired to snuff out some spookiness. These gigs can be demanding on your Sims psyche, but thankfully they pay fairly well.

This pack has a ton of both fictional and real-life inspiration. To go over where these influences come from, and how they manifest in-game, I’ll take it over to our Art Director Stephan Edwards!

Conor: Can you tell us what an Art Director does on The Sims 4?

Stephen: The AD works initially with Production, Design and Marketing to define the visual direction. Once we have moved into production their role is to maintain and inspire that vision by providing direction and feedback to artists, from concept through to the final asset.

Conor: What goes into the creative process when concepting for the Sims?

Stephen: Once the general theme and tone is locked down and approved, the team then refers to the key visuals and goes broad on gathering reference that reflects that direction. We begin on concepting out room views/clothing to investigate different narratives and moods, identifying elements of style, construction, pattern and color. At this stage, we are still working loose to make sure we explore all options and don't box ourselves in. As the team iterates on designs, we start to narrow down the selections and then turn to final renders. We draw on those early investigations to help inform our palette, material and pattern choices.

Conor: What sort of real-life examples were used for the Paranormal Stuff Pack?

Stephen: Reference gathering is a huge factor in designing assets and so it's fair to say that all the content is based on real life to some degree. The team tends to deconstruct styles and translate them through a SIMS lens, the simplified and stylised art of SIMS4 has a further impact on the final result.

Conor: If you had to choose, what was your favorite feature to work on across all of the Sims?

Stephen: Aaarg! That's a really tough question. Because the packs are so diverse each one has its own set of unique challenges. I would say the supernatural aspect of this stuff pack was a lot of fun and allowed the artists to get a little more fantastical and creative. Storytelling is such a fundamental part of the SIMS and that permeates through CAS and BB designs. While curating all the eclectic pieces we stuffed into this pack I was constantly making up little stories in my mind. Where the characters may have found it, what relevance does it have to them and ultimately is there enough depth in the design to spark the same questions in the players. Oh, and Guidry, he’s a composite of eras and characters. I would be really interested whether the players can pick apart the influences.

That about concludes our look at our latest Stuff Pack! Big thank you again to the SP18 team, working with everyone was an amazing experience and made the later part of 2020 a little less awful. Watching this pack come to life was an absolute thrill.

The prepatch including the new Scared Emotion is coming out January 21st, and the Paranormal Stuff Pack comes out January 26th!