White
Sign In · Register
Home› Forum Ideas & Feedback
May 14 - It's time for our Friday Highlights! You can check them out here!
May 13: Today is patch day! 😃 To read the patch notes, click here!

How do I get my uploaded image to show? 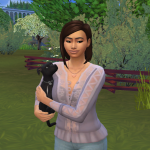 I wanted to upload an image onto my signature (I also tried on my wall), but the image doesn't seem to show. I have a URL for the image, I am using wordpress to host the image since that is where I host my Sims Lit stories. However the image just appears as the image title in a box where the image should be (you can probably see what I'm talking about below).