no new whims in realm of magic 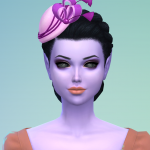 comicsforlife Posts: 8,493 Member
September 2019 in The Sims 4 General Discussion
and once again a pack with no new whims I wonder if sims 5 will have any at all