Forcing mermaids to stay in disguise? 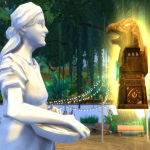 EnkiSchmidt Posts: 3,137 Member
July 2019 in The Sims 4 Packs Discussion
So far my mermaids have been a very secretive bunch, who changed not even when swimming. That means they must be capable to control their form to a certain extent.

There are two exceptions:
- When a mermaid is friends with my active sim, they will change into merform, regardless of how many random strangers witness it.
- Active sims who are mermaids will always change into their merform.

Both scenarios are not ideal for my backstory.
Is there a way to keep played mermaids in their disguises? Mod, cheat, I'll consider anything.
Simblr Currently running: Phillips Family life, loosely inspired by Detroit: Become human
0