White
Sign In · Register
Home› The Sims 2
The Sims 4 will be FREE to download across PC/Mac & Consoles on October 18! More info here: here 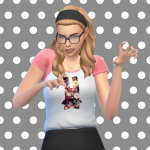