Sing for you Pose 2 micstand not showing up 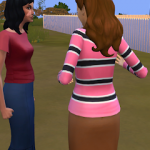 MadameLee Posts: 32,243 Member
December 2021 in General Mods Discussion
I didn't know where to post this but for one of poses I'm going to use require a micstand but whenever I try to download the mic stand which goes with the pose put put it in my game it doesn't show up and I do have Mods and CC on. Like zip, nothing . And it's not one of the normal micstands either. Its someone's CC I do have the microphone from the other creator because another pose maker couldn't get the original link again. But I want to use the mic stand this time just to make the chapter a bit different then the Mom singing in the previous chapter.. because the file says the micstand is included in the download but apparently its not since I can't find it at all in the game not in build mod.