White
Sign In · Register
Home› The Sims 3› The Sims 3 General Discussion
Sul sul! How many baes is too many? The answer is NONE! Join @kelseydangerous on her journey of love as she attempts to maintain 100 romantic relationships.
Follow along on her road to love here!
September 21st: Today is patch day! 😃 To read the patch notes, click here! 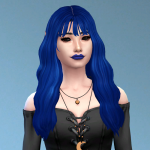 Samlish Posts: 232 Member
July 2020 edited August 2020 in The Sims 3 General Discussion
So um, I've been playing for 5 hours. I've seen a toddler age up to a teen in one playthrough today. He was on the honor roll as a child. (Proud simmer moment.) Uhm, I got a dog for the family and thought that I saved my game before she was taken away. So I thought "well I don't want to readopt the dog since her birthday is coming up" (she would've aged up without me seeing it

) and I went to the main menu. I didn't save except for 3 hours ago. I've lost 3 hours of gameplay, and my teen was a child and there was no dog anywhere to be seen in that save file. So I deleted the save file. Anyway how was your day?

Edit: All of that happened while it was her (the dog) birthday