White
Sign In · Register
Home› The Sims 4 Modding & Custom Content› General Mods Discussion
August 14 - Everyone ready for the Friday Highlight? It's ready for you here!
Are you ready for the The Sims Spark'd? Discuss the final episode here! Don't forget to use spoiler tags! Need a refresher? Click here!

Never used Mods - Should I take the plunge and start??? 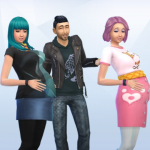 I’m a long time simmer (since I was in grade school ) and I’ve owned all the versions of the game (Sims 1 - Sims 4) but I have never used Mods before! I’ve always been anxious about them breaking the game and I’m not that tech savvy so I was worried I wouldn’t be able to fix a problem if it occurred. But I’ve seen some really interesting Mods that I think would really improve the game so I’m super tempted. Specifically I want to install “slide of life” - it looks like it will really help make deeper characters, which is a little lacking in the vanilla version.

So, should I take the risk? Any advise to avoid tech issues? Is there anyone else that is anxious about installing Mods and also needs some reassurance that it will all be ok?