4xel Posts: 24 Member
May 9 edited May 9 in The Sims Franchise Discussion
The Sims is a game of many faces, among which life simulation. That aspect of the game always has been very casual and as such, hasn't been held to the same level of expectation as competitive games as far as game balance is concerned, and neither should it. Still, taking the work out of the work reward cycle, or giving out reward that are huge but meaningless, can spoil and nullify big parts of an otherwise well thought out gameplay.

TL;DR: wall of text kind of structured like an essai, read the next paragraph (intro) and the last one (conclusion) for a distilled experience.

With that being said, let's a have a look at: skilling.
First I'll go about what is expected from a good levelling system, how TheSims series generally fares well in that area.
Then I'll point at how stacking modifiers up to absurd levels breaks the levelling system.
Next I'll state it stems from powercreep, and how unfortunate it is given ExpansionPacks require powercreep and TheSims by its modular nature heavily relys on EPs.
Finally, I'll throw some ideas that may fix absurd levels of modifiers stacking, some that incidentally deal with powercreep as well, some that leave it there in more reasonable proportions.

Like any effort-reward system, a good levelling system ought to
In theSims, skilling usually takes a decent amount of time, it's a very interesting challenge to fit study time within your Sims' schedule.
The reward is usually overly generous, but proportionate and inline with the audience.
The mechanics are awesome, you often got several way to level up the same skill, with a healthy variety of interactions with objects, the world and other sims, each with its own requirements, costs and benefits. The rewards are varied and satisfying in just the same way, integrating skilling fully into the rest of a Sim world.

Overall, TheSims series leverage all of its facets into an outstanding levelling system on paar with some of the best RPGs.

I wouldn't be doing this post if everything was so perfect though, so let the offender enter the court room (timestamp is supposed to bring you to 21:07 which is t=1267, though the whole video is entertaining): 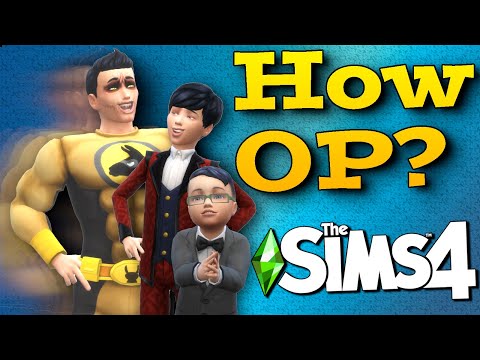 Not sure how to give proper credit, Carl's the name, very enjoyable Simmer

At some point of your simming, if you want to skill up, you're gonna look up at the issue from a rational perspective to find the shortest route to your goal. Besides cheating -of no interest for me here, that means going after the most rewarding activities and the most powerfull perks and items. Typically your list of learning speed modifiers goes like: Which yields a bonus ranging anywhere from 1330% to 160,600% depending on whether the bonus interacts additively or multiplicatively, a thing which you aren't given any clue about, though to keep it simple (/s) it's probably neither purely additive nor purely multiplicative.
Of course, all of that is only relevant if you actually practice skills, as opposed to, say, drink exlixirs that give you full skill levels at once (my personal opinion on those is very low).

With such huge boni, you can stack them and become so overpowered that you zoom through any skill in barely more than half the time it takes a regular sim to learn the first level of the same craft.

It's not just about being blatantly overpowered against my arbitrary scale of balance, it is about invalidating everything that makes a good levelling system:
There is no more challenge whatsoever. One can argue the effort it takes to have a super Sim in the first place is huge, making it interesting, and fair that the reward is huge as well. While I mostly agree, I'd argue that having to choose between bed and coffe, vactioner and fast learner, is a more interesting way to build a super than being immortal and stacking perks in no particular order. And being too super still takes away from the reward.

Indeed, the reward, albeit huge, become mostly meaningless. That sets of perks you unlock at level 5, 7 and 9 are only meaningfull if you're given the time to use them, and to appreciate their value against your efforts.

Likewise, all the interesting effort mechanics go to waste: you don't get to experience the ten different sports if one jogging is all it takes to be a world class athlete.


Now you could argue that you don't have to use these powers if you find them over the top. Again, I agree, and I mostly don't play occults for that reason and most legacy players follow some self restricitons of some sort, concerning lifespan alteration for example.
The problem though, is that the gameplay of most expansion packs revolve around putting in some efforts and ripping some rewards; and it is exactly how it should. So in practice, avoiding these powers may well mean missing out on otherwise interesting gameplay, or at least putting effort into not using rewards you worked for, which doesn't sound right. Each EP isn't an issue by itself, it only become one when you combine them and start collecting all the rewards with the same Sim (and why wouldn't you? most have a fav Sim they haul around every where).


That brings the next point: how did we get there?

Now before dissing powercreep, some considerations: A corollary of 2 is no hard cap on learning speed.

What can be done?

About 2, some effects are inherently multiplicative and can't be made additive anyway. Lifespan and learning speed are good example of orthogonal, multiplicative cofactors. Moreover multiplicative factors very often lead to interesting complexity that you don't want to get rid off: should I burn a trait on vegetarian to live longer, or on yet an other trait that will have me learn faster? More on that with multidimensional learning.

About 4, the Moodmeter from the Sims 3 lends itself much more to substituability than on and off moodlets and emotions alone (eg a visit at the spa can substitute a euphoric state of mind, or make up for a bad day).
To expand on the Tea vs Coffee example, a good balance between substitutes, a preference system integrated into Sims personalities, and a taste for exploring flavors fueled by wishes would ensure Tea comes in addition to Coffee rather than in remplacement. If the balance is done right, you don't even need powercreep, and even if you do, it's about getting roughly the same thing for less, rather than having more for free; much less compounding.


As you may have guess, 6 is my favorite point. Let's illustrate it a bit.

The learning speed could be That are your 4 dimensions.

Natural talent would be a compound of mostly static life state, life stage and traits, and might be temporarilly enhanced by silly contraptions like brain enhancer.

Awakeness baseline would be your sleep level and whether you had a full night, but it would also be impacted by various drugs, general excitation, boredom or specific fatigue (eg mental fatigue).

Focus would be impacted by distractions or lack thereoff in the surrounding environnement, by drugs (not necessarilly the same and in the same way as awakedness) and the enthousiasm of your sim, mostly depending on his taste for the subject at hands.

Activity depends on the type of activity. For example being tutored may be more efficient than learning on your own.

So a genius sim would receive a boost in natural talent for mind skills, while a bookworm would have a boost in activity when reading a skill book. Awakeness and focus overlap a lot, but drinking too much caffeine and sugar might keep you well awake but too agitated and with a bladder too full to focus.


The player would be decently rewarded by not neglecting any of these factors. He'd have to take more situational and sensical decision. If in the Sims3 you can replace a well rested moodlet by a dessert at the restaurant, with awakeness, you'd much rather replace that dessert by a coffee.

For awakeness and focus at least, you'd want them to be capped -you can only be so woke- even if soflty (smelling your sweet sweet coke has diminishing returns).


Now multidimensional factors, for learning and otherwise, are already omnipresent in the entire Sims series. I guess what I'm guetting at is that learning could use more explicit and sensible numerous dimensions, as well as more of them. The learning paradygm might then shift from mindlessly stacking free or cheap (timewise) powerfull effects with unspecified interactions, to an intuitive yet complex optimisation problem that doesn't cease to be interesting even after becoming as super as you can.


Conclusion: Modifier Stacking can break the game balance when not well thought out. Especially true in TS4, and to a much lesser extent, TS3. Diminishing returns of learning speed modifier effet can keep the powercreep in check, but too harshly. Multiple multiplicative factors each having diminishing returns might strike a decent balance level as well as pose interesting optimisation challenges.

While I don't think this idea will make it anywhere (not thanks to this post anyway), I still like to have it out. Being cautious with passive boost and generous with substituable boosters though, is a simple takeaway that I hope correct and relevant that could be applied without changing anything to the nature of the game.
Post edited by 4xel on May 9
0
Sign In or Register to comment.
Return to top