White
Sign In · Register
Home › The Sims 4 Modding & Custom Content › General Mods Discussion
February 14 - It's Friday. What does that mean in The Sims forums? Time to highlight some awesim discussions!
February 14 - 3rd vote results for the Community Stuff Pack are ready! 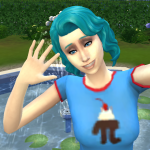 FanPhoria Posts: 1,286 Member
February 11 in General Mods Discussion
So, laike many, I'm a tad annoyed at the pervasiveness of celebrity sightings BUT I don't actually want to turn it off completely! Here's what I'd like, ideally:

If you're really an amazing modder, as a bonus I'd love it if the player could actually specifically rank the likeliehoods of celebrities showing up at non-hotspot locations of different worlds (like, a non-hotspot location in Del Sol Valley would be more likely to have a celebrity sighting than in San Myshuno which has a better chance than Brindleton which has a better chance than Strangerville, ect ect, you get the idea) but that might be too much to ask I know, but just throwing it out there lol.

SO if anyone knows of a mod that does that (or would like to take the idea and make one, lol) please let me know!
https://www.tumblr.com/blog/fanphoria
http://fanphoria.blogspot.com/
https://twitter.com/FanPhoria
0
Sign In or Register to comment.
Return to top