White
Sign In · Register
Home› Creative Corner› The Sims 4 Challenges, Stories and Legacies
The latest update addressed the crashing issue that some of you have been experiencing, Click here to found out more!
November 20 - Everyone ready for the Friday Highlight? It's ready for you here.

We Own Tonight - CASTING CALL Gen 3 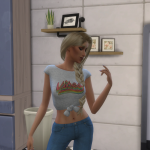 Skcaga6 Posts: 3,399 Member
July 2018 in The Sims 4 Challenges, Stories and Legacies
We are only 25 chapters away from the end of Generation 2. Owen is going to need some friends (and a love interest or two). I will be accepting sims until the end of this generation. A few may even show up in this generation as friends for Owen as he grows up. Families are fine also, even with pets. All submissions will be added to the game as either major characters or background characters.

Please use the tag #WOTGen3.

I have all of the packs and accept CC with links. Please don't link me to skins or eyes since I have default replacements for those already. Alpha or MM is fine.