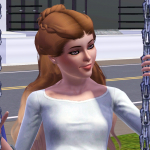 DeafSimmer Posts: 2,871 Member
October 12 edited October 27 in The Sims 4 Challenges, Stories and Legacies
I might share the lineage from my Plumtree App later. It gets updated from time to time. Here is a summary of the past generations before the thirteenth generation came around:

Gen 1
Stacy is the founder of the lineage. She has a husband named Lionel, and he was rich when she married him. When they died, they left their Brindleton Bay mansion to their descendants, although the mansion winded up being inhabited by ghosts as time went on.

Gen 2
Celeste is a housewife who had six children. When her children began getting older and having lives of their own, she owned a few businesses in Brindleton Bay. Although she inherited her mother's bakery, it wasn't long before her descendants sold the bakery to someone else. As for the flower shop, it had also been sold.

Gen 3
Rosalie met Xander through online dating. However, their marriage didn't work out, so she married a second time. Nathan had a better marriage with Sylvia, and it lasted an entire lifetime.

Gen 4
Caitlyn wanted to have revenge on her father, so she joined a gang to spite him and the "other woman." Eventually, she fulfilled her desire for revenge. She discovered that she wasn't meant to be in the gang, so she left. She had a private wedding.

Gen 5
Zelda and Hilda were cousins. Zelda was the daughter of Dawn, while Hilda was Selene's daughter. Dawn and Selene were the children of Nathan and Sylvia. The two cousins met Link and Ravio in Oasis Springs during an adventure. Like Sylvia, they saved the Magic Realm and the human world from the forces of evil.

Gen 6
Cassiopeia met a bad boy while in Del Sol Valley. She didn't like Chase at first, and he behaved a certain way because he didn't trust women too much. Eventually, they warmed up to each other and fell in love. Astraea and Kai had a whirlwind romance, and they once had to defeat Kai's uncle so the ocean would be a safe place for the merfolk to inhabit. Eilonwy got captured, so Finn rescued her. She did help the others defeat Ganondorf, though.

Gen 7
Lenore, Lydia, and Leah made selfish wishes on an ancient relic instead of breaking the curse on their mother at first. There was a brief situation in where a gangster followed them to the Magic Realm and gained magical powers, so he had to be stopped. Later on, the triplets made the correct wish, breaking the curse.

Gen 8
Millicent met Josh when he defended her one night. They proceeded to go on a bit of a journey to hinder the gang and to defeat Ragnar. They also helped a medieval maiden go back to medieval times.

Gen 9
Jasmine had a complicated love life due to the Romeo/Juliet dynamic. She fell in love with Ralston, a rich young man whose mother is friends with criminals. When they were older, she carried their child. Ralston met an untimely death, leaving Jasmine to raise their daughter by herself.

Gen 10
Stella's magical bloodline was dormant for a bit, and she grew up without a father. Also, she met Liam when they were children. They fell in love as teens. Ganondorf returned for the final time, so she had to hide from him until she gained enough power to stop him. The three sages helped out in the final battle.

Gen 11
Zelda the 2nd and Luna didn't get along at first because their mother showed favoritism. Luna, in a moment of vulnerability, gave in to Cyrus' lies and followed him to San Myshuno. An ordeal convinced her to leave the gang with Shawn's help. Later on, the girls defeated Cyrus.

Gen 12
Twyla and Oberon went out a lot, and during those travels, she had convinced him to reconcile with his father. Also, they had to deal with Draco's wrath at one point. In the end, Oberon's father divorced a fame-obsessed actress due to her horrible actions. Meanwhile, Oberon became the King of Windenburg.

Gen 13
The palace in Windenburg kept getting attacked by the Oasis Springs gang. One of the supposed gangsters, Kane and his brother, Mark, fell in love with Victoria and Sydney, respectively. Slasher and Ripley proceeded to threaten this generation, only to be defeated in the end.
Post edited by DeafSimmer on October 27
I won't come back to the Sims Forums.
0