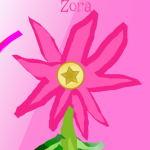 The Child: Ximena-Daria Roseline was inspired by runaway stories (both simlit and regular literature) and it has the element of supernatural in it as well! There is no omnipotent being, but there is a good group of beings and a evil group of beings (which will be explained later in the story).

Of course, most of these runaway stories involve the runaway being an orphan as well, which applies to the protaganist, Ximena-Daria Roseline, or Xim for short (or XDR). I've always liked runaway stories as they give a rags-to-riches feel to the story (it's more fun to play with sims working off the ground and very rewarding to become rich) but I've noticed all (or almost all) of these sims were at least teens and such.

I already had a supernatural save going so I decided to experiment with a runaway story. Except this time, the focus will be a child sim (yay!) and she also has some secret powers which I thought would spice up the story. Of course, as shown in the picture, she's a red-head (for special reasons mentioned sometime later in the story) and wears these orange sunglasses all the time. She also has red lips (for these same special reasons).

I feel that the younger sims (babies, toddlers and children) are pretty much ignored by other simmers and Maxis (and there isn't enough game or custom content for these ages either) but I actually play with them more than the adults, haha! I guess if I were a sim, I'd be childish. I've always found these younger sims charming in a way I can't explain and I also find myself wanting to create only cc for children and toddlers since they don't have a lot of EA stock to choose from, ahaha! (Well, the Nifty Knitting Pack has done some good but I don't have that due to my very limited budget on games...)

Anyways, solely focusing on child sims, Maxis deprived them of survival skills so they can't really live off the land without mods, which I'll be using to make this story possible and I'll use cc as well to make my sims look better for the story's purpose (I seriously couldn't find any messy-looking hair for female kids from the game stock so that is what I chose). (From the thumbnail, it's obvious that I have used cc for her lips that I made (I just turned an existing lipstick so that it can also be for children), but I have also used cc eyes (that I drew and made two swatches for so far).)

As for the mood and genre, I'd say it might be quite melancholy in the beginning but it slowly gets better and soon she is at the top! Everything is all well until suddenly she falls into a pit of darkness. It is yet again melancholy. Then they might reach a point where it becomes happy again but I haven't thought that far. I'm thinking it's supernatural, since my stories fall under multiple genres (I'm talented at combining multiple themes together gracefully, haha). I'm not one for spoilers, but just so you know what you're reading.

There are also some custom tweaks made in this story. Xim used to live in Selvadorada along with her mom (which isn't realistically possible for the game) and the house name is called the Denona Mist (it's Jungle Bungalow basically). Xim's name is pretty long as well as I thought it might make it have some meaning as to why her mother chose this name for her. And it isn't possible for the game for a child to live by themself, either, or stop going to school as well. I managed to make it work by doing some tricks and cheats, though! There might be more tweaks later on in the story but to tell you everything would be just spoiling it, haha!

And yes, I'm not a professional photo-taker so you might see plumbobs in the pictures. I'm too lazy to switch to another sim or turn the headline effects off, haha. I would probably have to so that it's realistic, though! Also, please give me any writing tips you want to share, I have been writing for a few years now, but that isn't a lot of time!

This was just the introduction, haha. Just a note, since I live in the USA, seasons and time will be portrayed differently, even if August isn't in the summer or September in the fall for you!

I'll try to post biweekly (Thursdays and Mondays at the best CDT time) as well, but let's show you the chapters (along with dates):