When did pool ladders become useless? 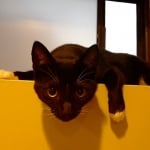 lsnishi Posts: 2,690 Member
March 2017 in The Sims 4 General Discussion
Hi all,
I just noticed that my sims just haul themselves out of the pool and that when I click on the ladder, no options appear. Has this always been the case and I just never noticed? I always put ladders in the pools to avoid sims drowning to death, but I'm wondering if there is any use for the ladder at all.