White
Sign In · Register
Home› Discussion› The Sims 4 Packs Discussion
October 23 - Everyone ready for the Friday Highlight? It's ready for you here.

Do mermaids EVER say yes? 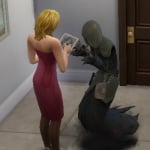 Stutum Posts: 1,037 Member
June 2019 in The Sims 4 Packs Discussion
As you all know, asking anyone if they're a mermaid is a nice way to lose relationship points. Whether they are mermaids or not, and no matter how good friends you are, they'll get insulted and deny it. Even when I played as a mermaid myself, and found another one swimming, we were conversing in the water, fishtails out and everything, and I asked, but the response was the same. "Where did you get that idea?" =P Makes me wonder why that option is even there when the reply will always be the same. xD
3