White
Sign In · Register
Home› The Sims 4 Modding & Custom Content› Mods & CC Technical Discussions
Fresh off the press - the April 13 Laundry List! Click here to find out more!
April 16 - It's time for our Friday Highlights! You can check them out here!
Welcome to all NEW SIMMERS joining us on the Sims forum! 🎉 Have fun on the forum and please make sure you check out the forum rules and
the rules about necroposting.
Sul sul Simmers! It's awesim to see that so many of you are starting new and interesting discussions! But please make sure that you do so in the right forum section. Thank you! 🙂 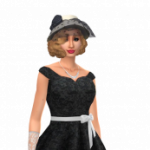 alostteen Posts: 56 Member
March 2019 edited March 2019 in Mods & CC Technical Discussions
Last year, I posted on this forum about two specific CCs that were causing trouble for me by being swatches on another item. However, it has gotten worse: I currently have some CC chokers by Enrique (or Heavendy-cc) that had an existing pair of chokers appear as swatch on them. The existing chokers were also corrupted in the swatches. I can provide proof if you want, but please do consider helping me out. Do I need to Batch Fix with Sims 4 Studio? I dunno, just lost.

P.S: I am someone with not much CC knowledge, besides meshes and recolors (not that I know how to do them lolz)
1