White
Sign In · Register
Home› Forum Archive› Community Stuff Pack Project (Laundry Day Stuff)
January 15 - Is everyone ready for the Friday Highlights? Check them out here.
Welcome to all new Simmers joining us over the holiday season! 🎉 Have fun on the forum and please make sure you check out the forum rules and
the rules about necroposting.
December 22 - It's the time of year again: Join the 12 Days of Simsmas! 🎄
You are browsing a read-only section of the forums. Were you looking for discussions around the knitting themed Community Stuff Pack Project? Click here!

SimGuruGraham Posts: 1,183 SimGuru
January 2018 in Community Stuff Pack Project (Laundry Day Stuff)
Hey everyone, it's time for a look at the new hairstyles coming in Laundry Day Stuff, as well as sharing info about our process of selecting and creating hairstyles.

Similar to the clothing and objects that you selected via votes earlier in this project, hairstyles are something that we create concept art of here in our studio, which is then handed off to external partners for creation of the final asset. If you'd like to learn more about that specific process, I'd recommend this post which details our workflow for objects. Some of you have asked why hairstyles weren't part of the votes that took place. Ultimately, there were two reasons why they weren't included in the voting process...

First, it's important to note that hairstyles are typically the most time consuming assets that we work with external partners to create. The process starts with gathering photo reference of different people wearing the hairstyle that we're creating, so that we have a variety of examples of what that hairstyle can look like. From there our artists will draw their own interpretation of the hairstyle superimposed over a bald Sim. They create two versions of these drawings - one which is opaque, which demonstrates what the final material should look like, and the other which is transparent, so that the modeler has a clear example of the shape and volume of the hairstyle in comparison to the position of the Sim's head. Throughout this time, revisions are made based on feedback shared by our art director. While this process isn't all that different from other assets, the amount of detail in each hairstyle means that these assets simply take longer to create than objects and clothing. This ends up impacting our development schedule; we tend to lock in our hair selections prior to the objects and clothing, so that our artists and external partners have more time to work on them. Looking back at the votes we held for this project, not only did that mean that we couldn't wait to include these alongside the objects/clothing vote, but we didn't even have enough spare time to hold a separate hairstyle vote. Essentially, the moment we had the results of our art style vote, we had to immediately start working on the hairstyles. This was the one hurdle in this project where we couldn't figure out a way to include a hairstyle vote without delaying the milestones in our development schedule.

Here's a look at some of the feedback that was shared for the Laundry Day hairstyles. Here you see the hairstyles earlier in the process, where the drawings are a bit rougher, and adjustments are still being made. Try spotting the differences between these and the final images down below 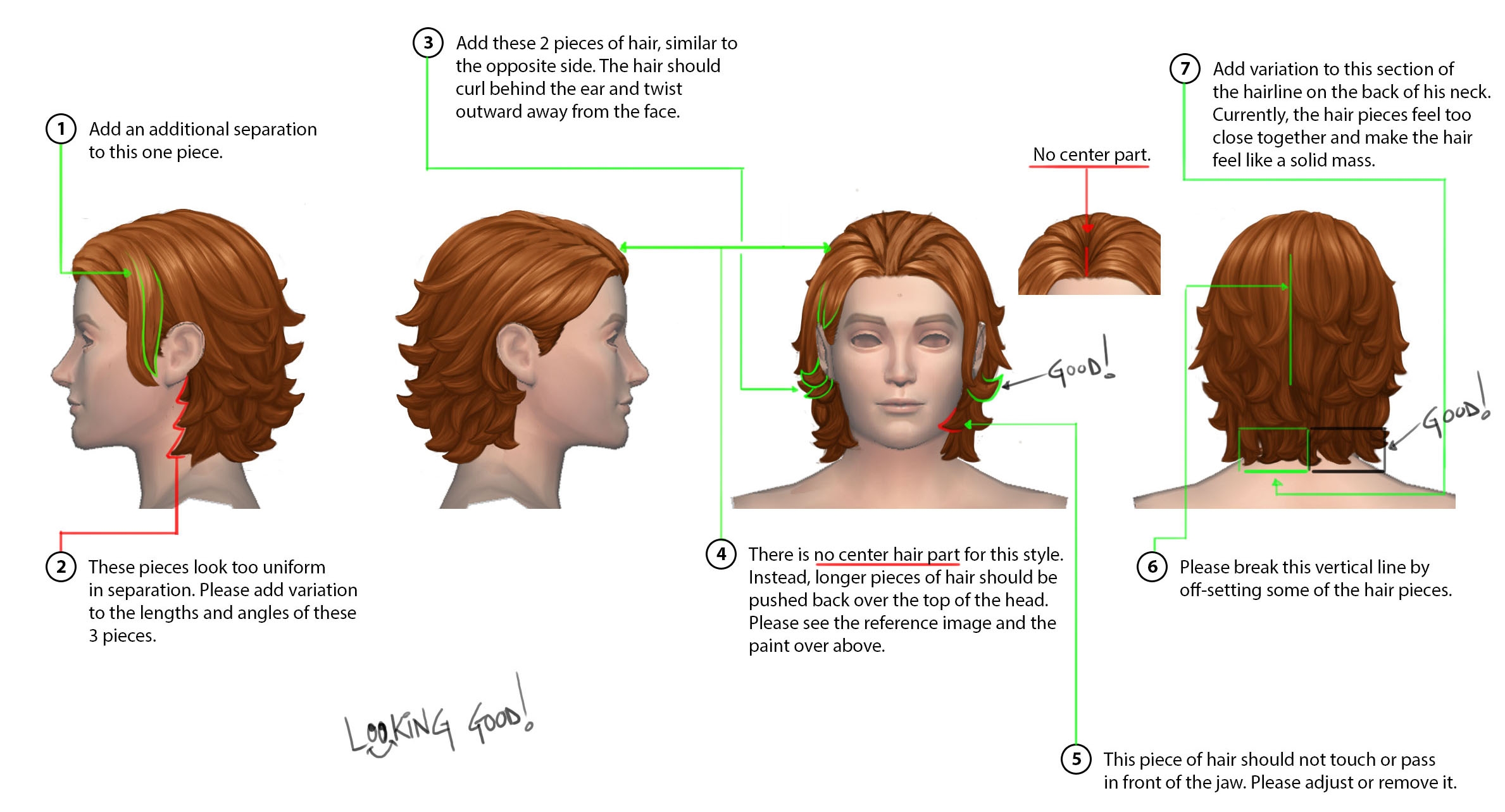 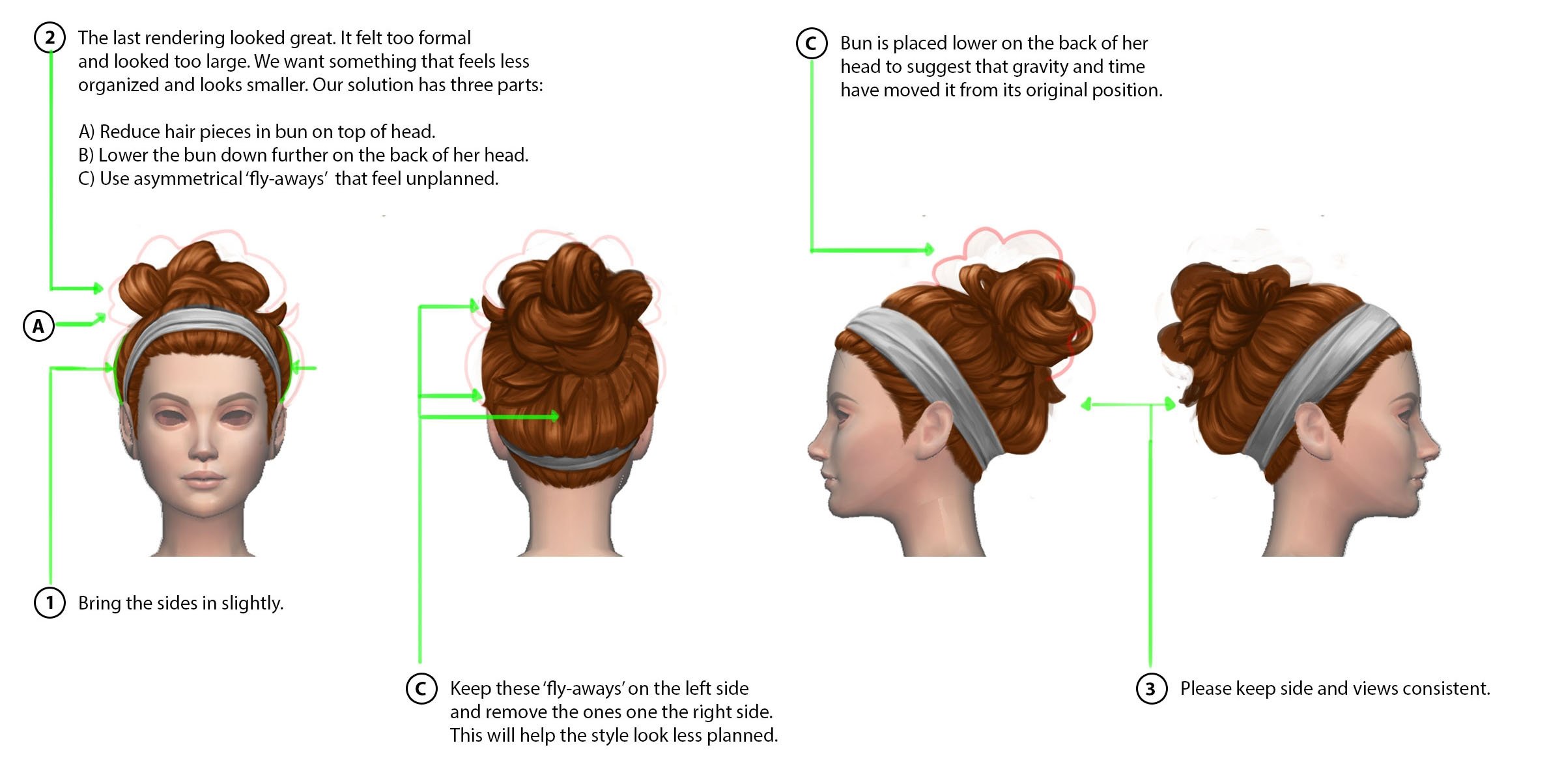 The second reason we didn't vote on hairstyles centers around a philosophical question of what we were trying to accomplish with this project. All of the votes you participated in for this project were intended to mimic the same development process that we follow internally. Each vote was based on the group discussions we have to select assets or features for a pack. But when it comes to hairstyles, they're typically selected by the pack's Art Director without a lot of outside input. Our art directors have collected a treasure trove of reference material of various hairstyles that we could include in the game someday, and with each pack that comes along they choose a few from this collection they've amassed. This allowed them to make decisions immediately following the art style vote, and already have ideas in place that they could act upon. Because selecting hair styles isn't really a thing we make consensus decisions about, it made less sense to hold a vote for it, so as to more accurately represent our development process.

With all that said, here are the final concept drawings we shared with our external partners so that these hairstyles could come to life in-game. You'll note the opaque and transparent views that I mentioned earlier, as well as the color variants for one of the hairstyles. To see how they actually turned out in-game, stay tuned for Laundry Day's full reveal... in the meantime, you can get a sneak peak of how they look in this season's quarterly teaser! 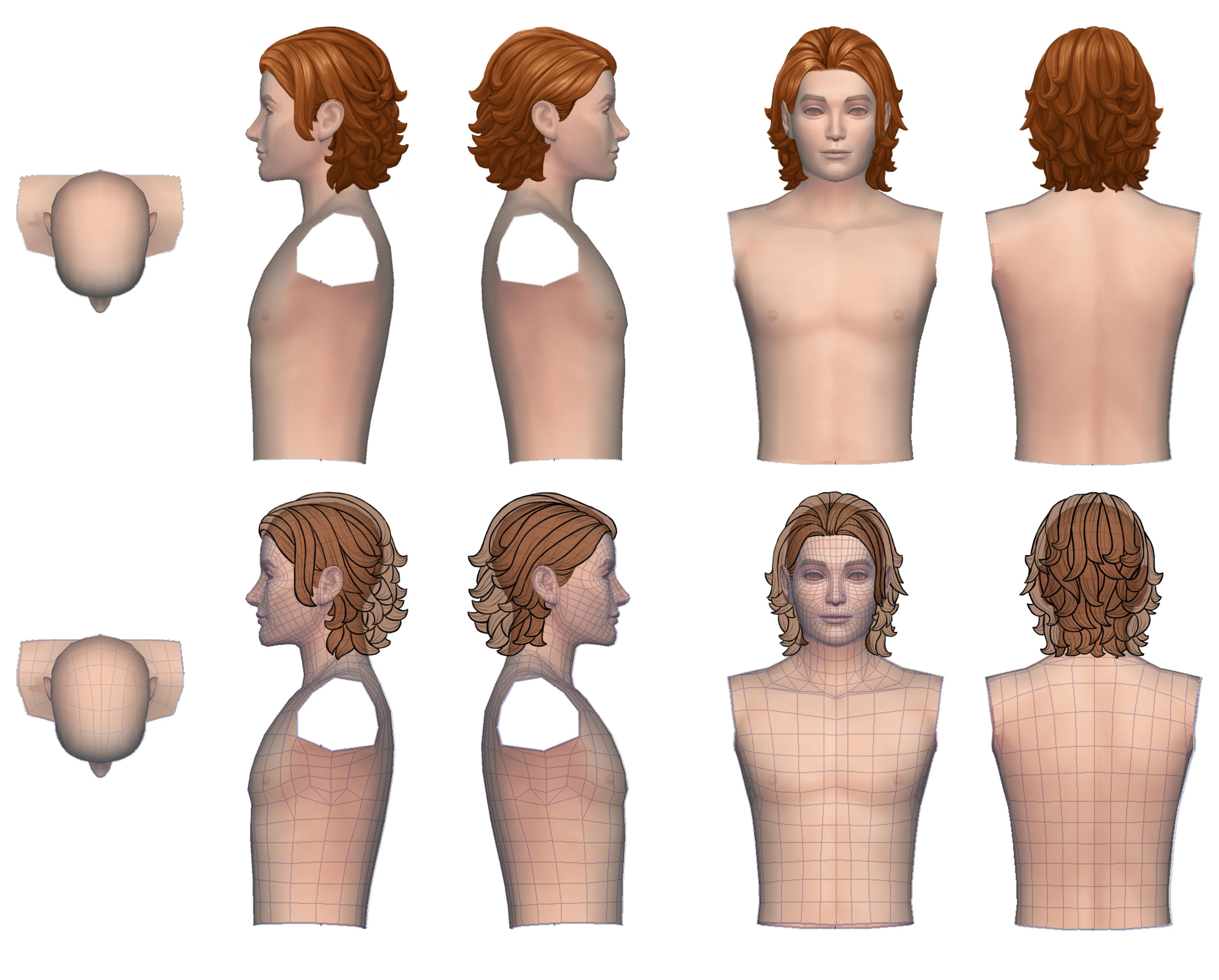 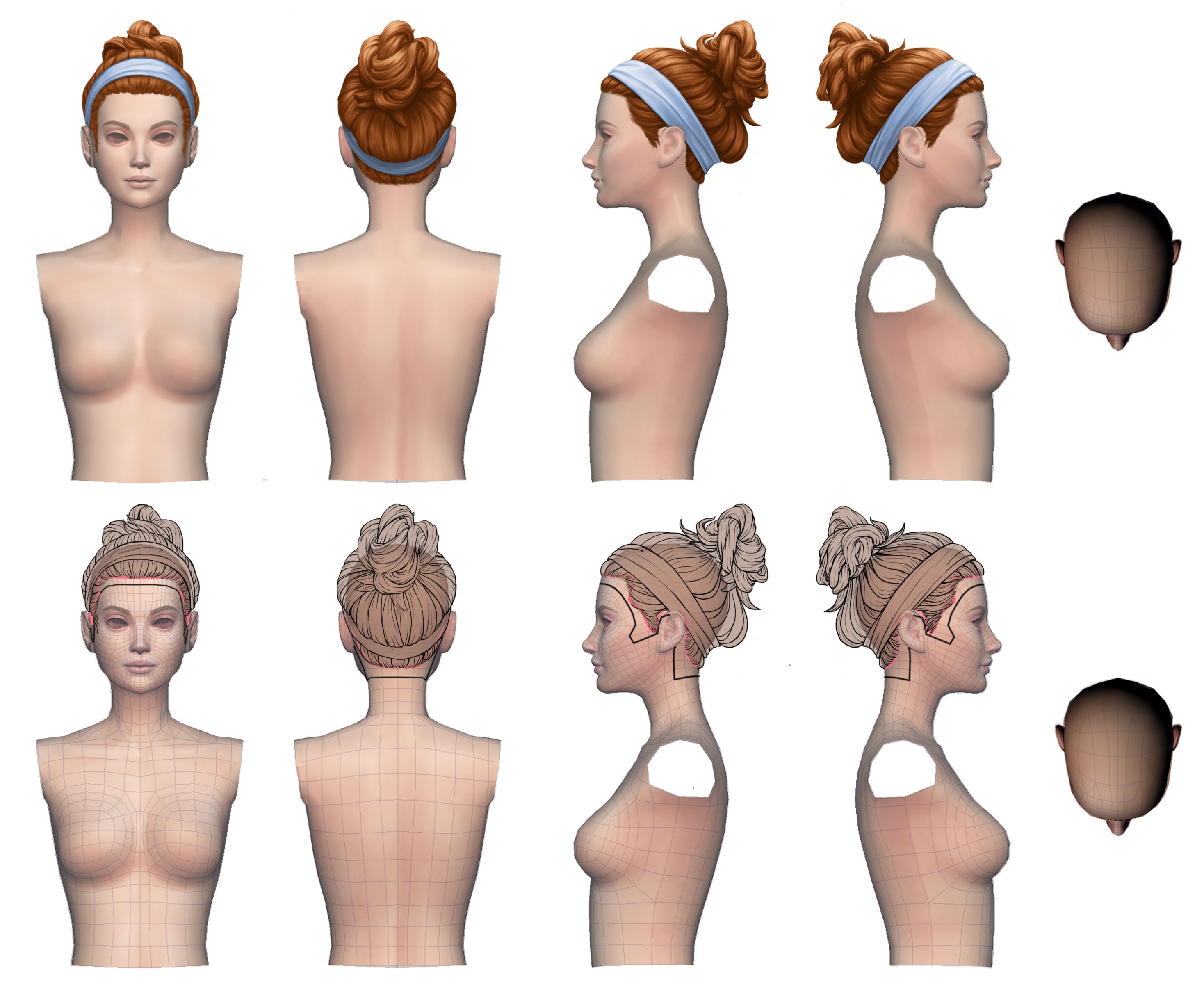 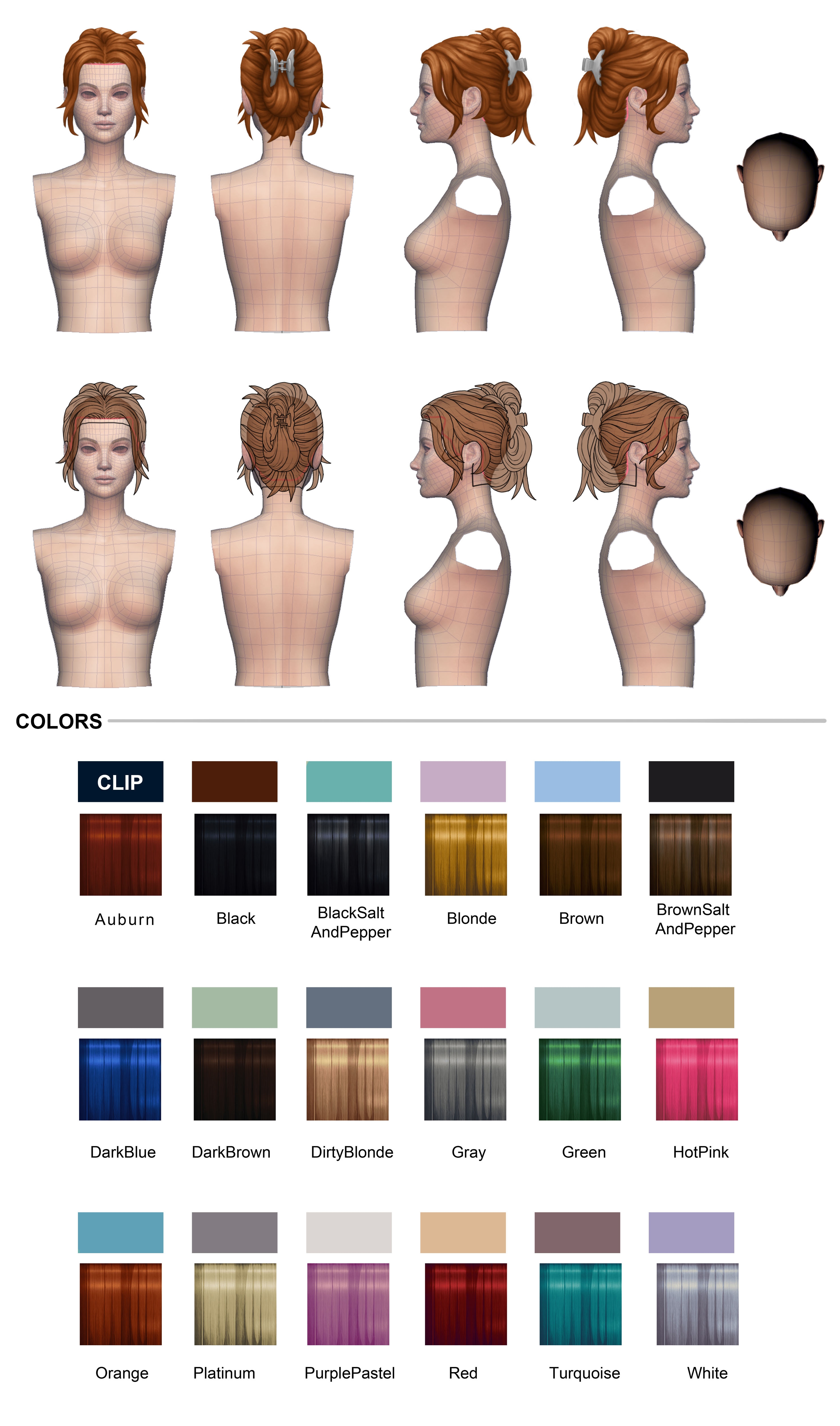