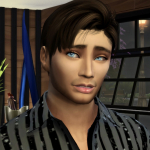 AudreyFld Posts: 6,468 Member
October 2017 edited November 28 in The Sims 4 Challenges, Stories and Legacies
Thank you for stopping by to check out my story!

This thread will be used to link to chapter updates and reader comments. Enjoy!
Post edited by AudreyFld on November 28