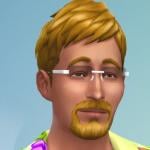 Romire Posts: 2,398 Member
March 2015 in The Sims 4 Packs Discussion
Apparently its released on the 30th

Anyone know if this is right?
Romire - Australian Gamer