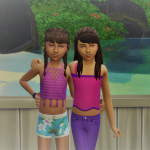 Sha2520032003 Posts: 2,102 Member
March 2019 edited March 2019 in The Sims 4 Game Feedback
I usually don't post too many complaints on the forums. But after seeing this NPC in my game, I just had to post & plead for some change. What is going on with NPC's outfits? It's no secret that NPC's showed up in some pretty bad outfits. But it's gone from bad to just completely outrageous.
And this Sim used to be a active/played Sim, & so she had 3-5 outfits in each category already picked out. Why is she showing up in such hideous clothes? This isn't a holiday or costume day or anything. It was a birthday party & she showed up like this!!! I'm just beyond confused as to where these outfits come from, especially when there are already outfits picked out for her.

I'm pretty sure this is happening in everyone's game. I usually just try to ignore it.....but when it's my own Sim who is now NPC....seeing this just made me very upset. Thank goodness for mods as I'm able to click on her & pick one of her outfits that I already setup for her. But I should not have to rely on mods & it's pretty sad that I do, to fix this nightmare. There are several Simmers who do not play with mods though....& I guess they get stuck with this. I hope the Sims team can provide a fix, as this is beyond ridiculous.
11