Sims 4 Shader Lists& possibility of help on getting alpha editable hair to work? 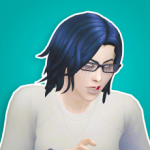 I'm working with CAS items, specifically hair. I managed to get this Gem (Below) working using the SimGlass Shader.
imgur.com/CARZxeV
There is issues such as it behaving like glass, having bad interaction with sunglasses& crashing the game (Though that crash might from a mesh problem)

I would love to test more using other shaders but there seems to be no indication on what shaders are currently being implemented in the game within the modding docs. My question is would there be a possibility of getting a list of shaders or help on getting alpha hair to work in the game or a possible reason why it won't work if otherwise?
-This Space for rent!-
43