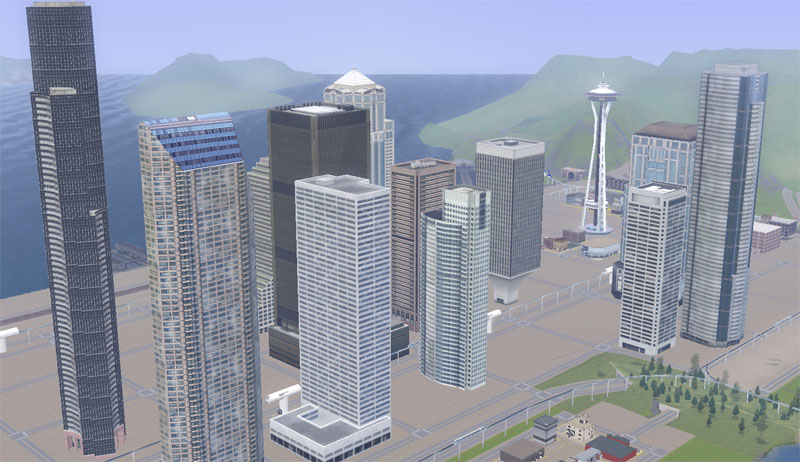 During the past week, however, I pulled out Rain City and started to work on it again. Some of these things are not new to this forum, but are new to the Alpha 5 version. I gutted the downtown and added a couple of custom skyscrapers. I also have a new Space Shaft. 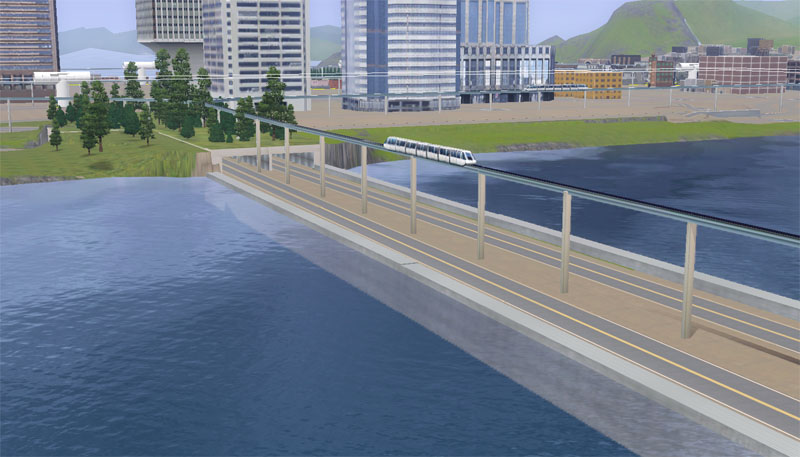 I spent the past couple of days revising my monorail system, converting it into one big object. Before it consisted of hundreds of bits and pieces, which probably did nothing for performance. So I combined all of those bits and pieces together. There are still a few odds and ends to work out, but the tracks and trains are about 99% done.

The above picture shows the current state of the floating bridge between downtown Rain City and Money Island. A monorail speeds between the traffic lanes. On the Rain City side, the road disappears into a tunnel. 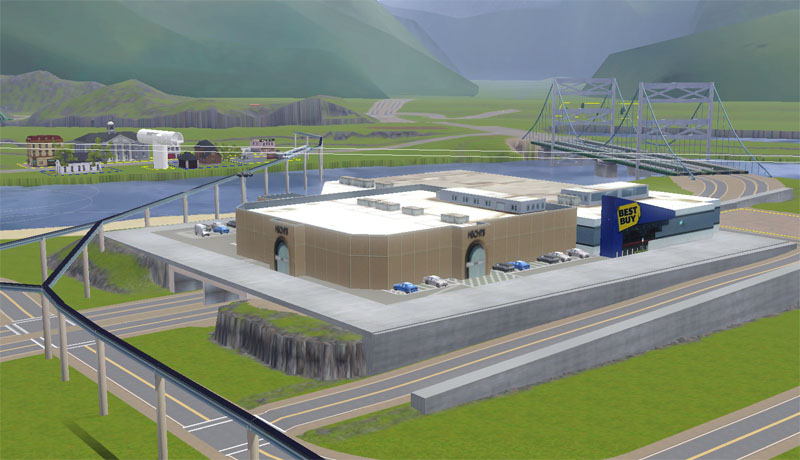 The northern part of Money Island will be a commercial area. So far, I have a shopping area over a tunnel over the main highway. This part of the shopping area is pure deco.

In the background one can see my take on the Tacoma Narrows bridge to the right, and the small farming community of Simview on the left. The monorail terminates at Simview, allowing the community's residents quick access to other parts of Rain City.

You can pretty much see where the custom distant terrain meets the world. Eventually I will do a better job in blending this, perhaps in the Alpha 6 version of the world? For some reason, Nessie, who lives in the distant terrain, did not show up.

While I want to keep the number of lots down, I really did not want to make deco versions of some of the mansions. Doing this would take a lot of time, and most of these buildings are one off items. So I am doing an experiment: the zoning on most of the residences will be set to No Visitors Allowed. (One can set this zoning in CAW without losing residential stuff like refrigerators and stoves.) I am hoping that this turns these lots into the equivalent of deco buildings, so they don't cause routing problems.

The eastern wilderness is still pretty rough. I tore up this entire section of the world, and have not gotten around to fixing it again.

When I started this world, I wanted a little bit of everything. Since then, Twallan's Traveller mod came out, and I don't know if I would do the big a-little-bit-of-everything style mega world again. It seems one can make microworlds for different styles of game, then use the Traveller mod to move between these worlds. But I am committed, or perhaps should be.

The above picture shows part of my farming area, to the north of Simview. Several things are worth mentioning. The area beyond the railroad tracks is all distant terrain. Some of the textures are rather screwy and need to be reworked. The railroad bridge to the left is a custom item, as is the railroad overpass to the right.

The farm buildings are derived from models I downloaded a long time ago, and made substantial revisions to. The more distant one served as the home for one of my early sims families, and is a transplant from one of my Sunset Valleys.

Eventually, I would like to add more Pets features to this part of the world. I probably will replace the equestrian center with a county fairground. Then have a bunch of critter spawners in this area. 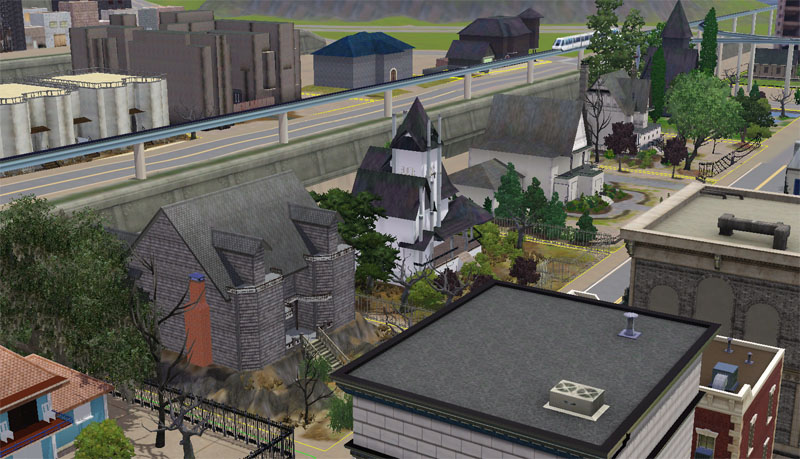 Also, the Transylvanians have a strange superstition about mirrors; one will seldom find a mirror in a Transylvanian house.

One of the stranger characteristics of the Transylvanian community is their tendency to build castles on the top of hills. One wealthy Transylvanian built this version of Bran Castle overlooking Little Transylvania.
0