White
Sign In · Register
Home› Feedback› The Sims 4 Game Feedback
February 3rd- It's time for our Friday Highlights! You can check them out here! 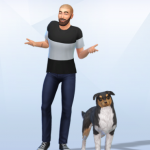 Trying something new here to help make your feedback more visible and easier to collate for the Sims teams. After each base game patch I'll set up a thread like this one to gather feedback on what you liked, disliked, etc. about the release. Think of this like an official version of the Positive Thoughts and Negative Thoughts discussion threads for packs.

Please keep in mind that this not a thread to discuss bugs that haven't yet been addressed. Please continue to use Answers HQ for those as we have dedicated staff there to assist and report on them.

That being said, please tell us what you think?
Post edited by EA_Solaire on November 2022
Found a Bug? Let us know here. Having a technical issue with your game? Reach out to us here.