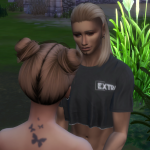 February11 Posts: 11,987 Member
August 9 edited August 9 in The Sims 4 General Discussion
Origin just updated, and when I went to play (I usually play offline), it wouldn't let me, and next minute my game began repairing.
Once it was done, it still wouldn't let me go offline to play, and it wanted to update to the new patch.
It's now repairing again!
Anyone else have this happen?
I THINK, THEREFORE I AM, I THINK