My celebrity is not so popular 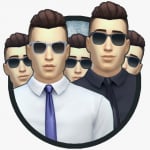 BlueOvale Posts: 740 Member
January 16 in The Sims 4 Packs Discussion
Granted, she's a materialistic snob who lives alone and has very little friends, but she's still a proper celebrity. Her reputation is neutral, but yet when I play other sims and I see her making her entrance in public places, all the townies wave their arms and go bleh. Like to say oh no, not her. Then they start adoring her like nothing happened. I mean this should not be happening even with a neutral reputation.
0