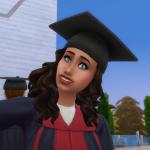 JueJue Posts: 69 Member
November 2021 in The Sims 4 General Discussion
I've played this version of the sims since it came out and in all that time have had 1 sim die of laughter. In the last 3 weeks, I've had two sims die of laughter. What is going on? Anyone else notice this suddenly?
0