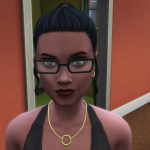 This thread gets rid of the limits. Post as many as you want--I know I will

I just ask that it's screenshots only, without a long story to go with it (a description of the shot is fine)
21